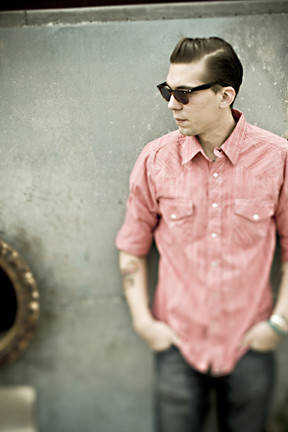 INDIANAPOLIS -- Just two guys and the music -- that's all it takes some nights.

That was certainly all it took Saturday night, as Justin Townes Earle and touring partner Cory Younts tore through a two-hour, 33-song set at Spencer's Stadium Tavern in downtown Indy.

While his crowds have grown accustomed to blistering sets, Earle said it's an especially common phenomenon at the small bar in the shadow of Lucas Oil Stadium.

"For some reason, Indianapolis is one of my best towns in the U.S., and not a whole lot of people can say that. But it all has to do with Spencer's Stadium Tavern," he added. "The Spencer's shows are definitely a thing unto themselves."

From the moment the duo took the stage, there was no pretense about what the evening's purpose was.

"My name is Justin Townes Earle. This is Cory Younts. We're gonna play you some hillbilly music," Earle said. He then launched into "They Killed John Henry," the third track on his Midnight at the Movies, which will be released next Tuesday on Bloodshot Records.

But the concert wasn't simply a vehicle for the new album, as Earle and Younts played a healthy mix of songs from the new album and his two previous releases. They covered the bulk of the catalog, as well as a mix of covers that included the Carter Family, the Replacements, Buck Owens, and Randy Newman.

Bearing both the name of his father Steve Earle and the late, great Townes Van Zandt, Earle is the name on the albums and the one that gets people to the show. But as a live act, it's a joint effort between Earle and Younts.

Earle sang all the lead vocals and played acoustic guitar throughout, but multi-instrumentalist Younts wore several hats. Besides singing harmony on most songs, he also played banjo, mandolin or harmonica, depending on the song. "Cory Younts" may not be on the marquee, but his solos stand a good chance of stealing the show on any night.

While the albums may have full band arrangements, Earle has stuck with the two-man approach for tours.

"It'll just be me and Cory. The thing with the band is it's just so expensive. It's really expensive to carry all the equipment, and we haven't had a bad live review in two years. I don't see any reason to fix what ain't broke," Earle said.

After touring Europe in January, the Spencer's gig was Earle's first on his U.S. tour. He apologized to the crowd for being in a hurry to return to Tennessee.

"I haven't been back to Nashville in almost three months, and we're going tonight," he said. "So you'll have to excuse us after the show 'cause we'll be getting back to Tennessee."

But then he did two encores.

Maybe it was Spencer's. Maybe it was Indianapolis. But this duo is too good not get reactions like this every time out.

Earle will most certainly be returning to Spencer's sooner than later. Those who love classic country and bluegrass, or just a good time, have to do themselves a favor and check out the show.