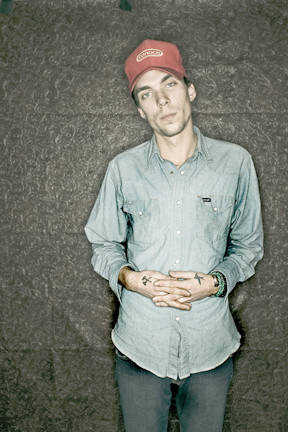 When a child follows a parent into his or her chosen line of work, it's easy to try and compare the work of the two.

But to make that mistake with Justin Townes Earle (son of country rock royalty Steve) would be selling short the work of the younger Earle.

Certainly there are similarities in the chosen genre and the vocals, but as Justin is quick to point out, he grew up with his mother, who has also had a profound impact on the music his listens to and plays.

"I grew up with my mother, and my mom listened to Metallica," Earle said. "It was actually the Nirvana Unplugged record that turned me on to Leadbelly because Kurt does 'Where Did You Sleep Last Night' on that record. That's kind of what sent me searching backwards. That would make me around 12 or 13 years old when that record came out."

Now 27, Earle shows the best of both worlds on his release Midnight at the Movies, released Tuesday on Bloodshot Records.

Like his debut album The Good Life and EP Yuma, the listener finds plenty of influences from the classic country, folk and bluegrass worlds in tracks like "They Killed John Henry" and "Halfway to Jackson."

However, also present are more definite rock and pop influences on "Midnight at the Movies" and "My Mother's Eyes."

The latter is the album's standout track, an autobiographical piece in which Earle concedes he is his father's son, with the temper and addiction problems that might entail. But in a more moving moment, he notices his "Mamma's" eyes and her good judgement.

More often than not, though, the album strikes a balance between the two extremes. This is most obvious on his cover of the Replacement's "Can't Hardly Wait." Far from Paul Westerburg's original arrangement, though, the songs catchy riff is played on mandolin.

But for fans of the older Earle, here are the comparisons: Justin has Steve's gift with words and his love of mixing traditional arrangements with modern songwriting and views. In the vocal department, one can hear Steve's voice, but slightly cleaner and with much better range.

For any fan of good music that defies immediate categorization, this album deserves not just a spin, but heavy rotation. This guys is more than just another neo-traditionalist or the child of a star.

His star is already shining brightly on its own.