Decemberists lead listeners on adventure with The Hazards of Love 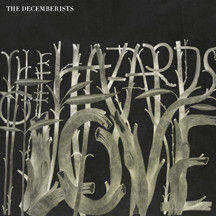 With the Who's Tommy set to take the stage at DePauw next month, rock fans could be led to wonder, "What ever happened to the rock opera?"

While the form no longer finds practitioners among the biggest bands in the world, it finds itself very much alive in the Decemberists' The Hazards of Love, set to be released March 24 on Capitol Records.

While the Portland, Ore.-based quintet led by Colin Meloy has in the past experimented with narrative albums in the form of the 2003 EP "The Tain" and 2005's Capitol debut The Crane Wife, Meloy has turned the form into overdrive with the new released.

The tale centers on a woman named Margaret and her interactions with a shape-shifting animal, her lover William, a forest queen and a cold-blooded rake.

It's a demanding album of the listener, not simply asking us to listen to a song to three or four minutes and then move on to an entirely new form. After fading in on an instrumental prelude, the music moves seemlessly into "The Hazards of Love 1 (The Prettiest Whistles Won't Wrestled the Thistles Undone)," the first of four movements that share their titles with the album.

As the album moves, Margaret and the listener are drawn deeper into her adventure with each track.

One struggle of the album is the difficulty in following the plot. While Meloy's voice is suited perfectly for the archaic language of his songs, it becomes hard to keep track of what part he is singing. With Meloy acting at times as the narrator, as William and as the rake, it takes several listens to sort out exactly what happens to Margaret and William.

But with Becky Stark voicing Margaret and Shara Worden singing the queen's part, the album produces a number of lovely duets.

However, none of this can overcome the essential problem of the album: it lacks anything truly catchy.

While any band that shies away from the single format in favor of an ambitious album should be applauded on some level, they do so at their own risk.

Sure, the true believers loved the concept of Tommy and Quadrophenia, but the albums also contained solid singles in "Pinball Wizard" and "5:15," respectively.

Even in the Decemberists' own catalogue, The Crane Wife had "O Valencia!" and "The Perfect Crime #2," which could both stand for themselves as musical works.

The closest the new release comes to this is "The Rake's Song," but the song's actual content (a father telling the story of getting rid of his children) is so detestable, it would certainly never fly as a single.

This isn't to say, though, that the album is without its strong moments. The finale, "The Hazards of Love 4 (The Drowned)" is haunting, as the couple pledges its love thought dying in a river. It's not good time stuff, but it has a Romeo and Juliet poetic kind of feel.

The mix of instruments -- using hard rock guitar, harpsichord, steel guitars and violins, to name a few -- is outstanding. It's hard to classify the genre of this piece, but that's a good thing.

And finally, any composer who can keep together a single theme through 17 tracks and nearly an hour's worth of music should be applauded. We live in an ADD culture, and Meloy seems to be fighting against that with guns blazing.

The Grade: C+ : While The Hazards of Love may fall short in some areas, it is certainly worth a shot for the right listener. Fans of the band should absolutely own it, as it's the next logical step in the band's career. Anyone who wants their music to challenge them might also want to tune in.

But the casual listener should stay away. This one might just be be hazardous for many listeners.