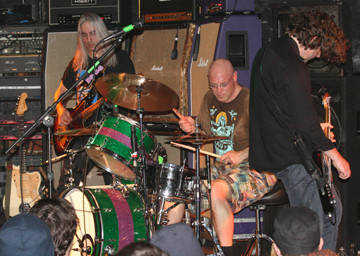 Dinosaur Jr's (from left) J.Mascis, Murph and Lou Barlow rock the packed crowd Bloomington's Bluebird on April 10. The band is currently on a tour of smaller venues in advance of its June 23 release, Farm.

BLOOMINGTON -- If it's too loud, you're too old.

Let the record show: Dinosaur Jr. is not too old.

Twenty-five years after they formed in Amherst, Mass., one of the great pre-grunge alternative bands is back on tour with its original lineup, showing no signs of mellowing with age. The three fortysomethings played the Bluebird in Bloomington last Friday.

It doesn't seem they'll be slowing their pace or turning down their amps anytime soon.

As original members J. Mascis, Lou Barlow and Murph walked slowly onstage (a small stage crowded with as large a stack of Marshall amps as was possible), more than one joking fan had to think, "What are these dinosaurs doing onstage?"

From the opening notes of "Bulbs of Passion," those thoughts disappeared.

Dinosaur Jr. gave its crowd a blistering 15-song set whose energy few 22-year-olds could pull off. And no youngsters could replicate this band's musicianship.

Watching the band onstage, one saw three men who knew their roles and played them to perfection. The sound began with Barlow's bass, which, considering the music's volume, was felt with the body more than heard with the ears. As the crowd moved and swayed, it was to the sound of the Barlow's bass.

Murph's drumming was lightning-fast and drove the band at its break-neck speed. It made the 20 minutes he spent adjusting and readjusting the drums before the show worthwhile.

It's a tight rhythm section, both in playing and physical proximity. Barlow lingered close to Murph's trap set, facing the drummer as much as the crowd. The closeness was only broken when the bassist would step forward for harmony vocals or the occasional lead.

And then there's Mascis. Standing on the left side of the stage, the crowd's eyes went to him for his old hippy hairstyle, his patented nasal drawl, and especially his virtuosic guitar work.

His long, noodling solos as strong as ever, the styles ranged from heavy metal buzzsaw to a more jangly college rock. But it was all loud, all distorted, all what you expect from Mascis.

The set list was that of a band with a quarter century under its belt. There was a mix of eras -- the classic stuff, the recent stuff and even the first ever performance off the band's upcoming album.

But a band like this knows it's the old stuff that packs the house, and their back-to-back playing of "The Wagon" and "Freak Scene" was the apex of the performance. The former warmed up the crowed before the pure energy of the latter absolutely electrified the room, with many fans singing along to every word. During a "quiet" moment late in the song, their voices could even be heard over the buzz of the amps.

Bloomington may have missed the band in its prime, but close your eyes and you wouldn't have known the difference. This bodes well for Farm, the group's next album, set to be released June 23 on Jagjaguwar Records.

But none of this answers the question of where these guys continue to find the energy to play as they do. Maybe they'll turn it down when they're 50.