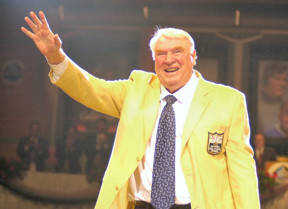 Anyone else can say what they want, but I'm going to miss John Madden.

Sure, it's gotten a bit rough in recent years. Even in the time he's worked with Al Michaels (my favorite play-by-play man ever), he has even brought down the ever-steady Michaels. They haven't exactly been the dream team some might have envisioned.

And being a one-time faithful fan of Madden's video games, I got so sick of hearing the same catch phrases thousands of times.

He was standing in the hole, waiting for something to develop ... and WHAP!, he got developed!

But I cut my teeth on Madden and Pat Summerall covering NFC games on CBS and Fox in the 90s. Those guys were class acts, and they are absolute legends. They brought out the best in one another and the best in football.

Weekly, Madden would come into your living room and enjoy the game with you. In his time, he worked for CBS, Fox, ABC and NBC -- all four of the major networks. So in his way, he wasn't so much an asset to any one network -- he has been an asset to the entire landscape of pro football.

The ghost of Howard Cosell and many others will have to excuse me, but for my money, John Madden is the definitive figure in pro football commentary.

It was more than that, though. Madden was obviously an amazingly intelligent man. He took his job as head coach of the Raiders as an unknown 33-year-old and proceeded to win more than 100 games and a Super Bowl. For his efforts, he was finally rewarded with induction into the Pro Football Hall of Fame in 2002.

But for all his accomplishments, as a commentator, Madden wasn't afraid to play the clown. Sure, he brought loads of know-how to the booth, but he brought fun. There were BOOMS! and turducken legs and way too many telestrator displays.

Watching a Madden telecast was always fun, and that was a credit to him. Not only has he influenced other football color men, but after him, guys in the studio (Terry Bradshaw), other sports' color guys (Dick Vitale and Bill Raftery) and even some play-by-play men (Gus Johnson) can make the games fun that past generations never experienced.

Thanks to Madden, we can realize that, sure, these guys take their sports seriously and know what their talking about, but they also keep it light-hearted.

Maybe his attitude is best summed up in this quote of his I found recently:

Self-praise is for losers. Be a winner. Stand for something. Always have class, and be humble.