Tommy begs to be seen, felt 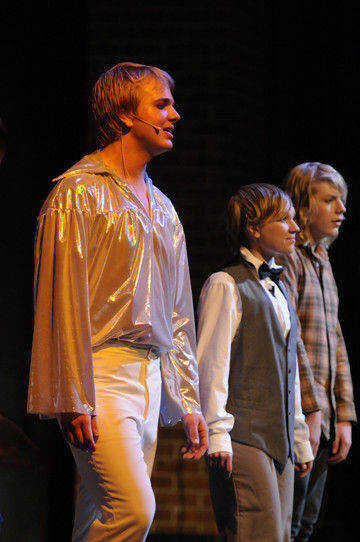 Pulling off a musical that was written by one of the world's most accomplished rock bands and later turned into a successful motion picture by a slew of acting and music stars can be daunting.

This weekend, a group of amateurs at DePauw have shown themselves up to the task.

The Who's Tommy is in the middle of a four-day run at DePauw's Moore Theatre at the Judson and Joyce Green Center for the Performing Arts, and anyone looking for an entertaining two hours this weekend should pick up a ticket.

It is the story of Tommy Walker (played, at different ages by Lauren Palmer, Calvin Timm and Case Nafziger), a boy who is traumatized as a youth when he sees the accidental death of his mother's lover. After being told he didn't see or hear anything, Tommy blocks out the world, no longer seeing, hearing or speaking anything.

It's a roller coaster of emotions for Tommy's parents (Julia Rohm-Ensing and Matt Patterson) as they search for answers as to what can bring Tommy out of his cocoon. The audience follows Captain and Mrs. Walker as they go from despair to hope and back and forth again.

For 15 years, Tommy is seemingly able to relate only to two things. The first is his own reflection in a bedroom mirror. In it, he sees the younger versions of himself, longing to escape as they sing "See me. Feel me. Touch me. Heal me."

The second connection is to a pinball machine. In spite of everything else, Tommy is an ace at pinball. (That deaf, dumb and blind kid sure plays a mean pinball.) His ability at the game brings him notoriety and a cult-like following before and after his ultimate healing from his psychosomatic problems.

Tommy grapples with the problems of illness, healing and, in the end, the miracle that is everyday life.

Perhaps most notable about DePauw's performance of this musical is its pace. There is no rest for the weary in this one as the cast and crew of several dozen people move as one to pull this one off.

The play is constant motion. The lights fall occasionally, but only for a few seconds at a time. More often, though, the action (and lighting) would shift to another section of the stage as several crew members scurried on and off stage, taking away the old props and bringing in the new.

There is really nothing set up in the way of a permanent set and no curtain to hide the crew work. Instead, your eyes are simply led away as the set pieces descend from the rafters or roll in from the wings. The choreography of this show is notable not only for what happens onstage, but how the crew is so synchronized as well.

And then there's the band. An ensemble of guitars, violin, French horn, drums, bass and keyboards isn't something you see every day, but this ensemble is outstanding.

Their endurance may be as notable as anything, as they play almost constantly. In the first act, it is only right before "Pinball Wizard," the act's finale, that they get even a short break from their playing.

On the stage itself, the acting, singing and dancing is fun and entertaining. Nafziger, Rohm-Ensing and Patterson give strong performances as the three leads.

In short, this is a performance worth seeing. It certainly lacks the polish of the Broadway or film version, but it is two hours of good entertainment.

Tickets for the show are $6 for adults and $3 for students. The production is recommended for mature audiences.