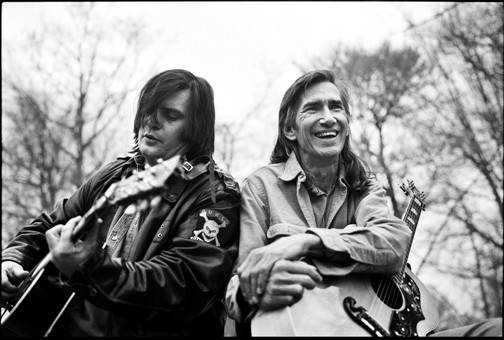 Steve Earle has paid tribute to his late friend and mentor Townes Van Zandt in a number of ways over the years. In 1982 he named his son Justin Townes Earle after his fellow Texas singer-songwriter.

In 1995, he famously said, "Townes Van Zandt is the best songwriter in the whole world and I'll stand on Bob Dylan's coffee table in my cowboy boots and say that." (I badly wish this had actually happened ... and it were on YouTube.)

Now it's 2009, and Earle has released Townes, a 15-song collection composed entirely of songs penned by Van Zandt. Earle's album, released May 12 on New West Records, offers a mix of true-to-the-original arrangements and complete reworkings. This diversity stands as a tribute to Van Zandt's versatility as a songwriter.

But the collection isn't simply a monument to the genius of Van Zandt, who died on New Year's Eve 1997. Earle also shows off his chops as a performer. (As if we needed proof.) Is the music folk? Or country? Or rock? Or bluegrass, alternative, blues?

Earle opens the collection with the oft covered "Pancho and Lefty" and uses a winning formula -- he doesn't change it. The track is Earle performing the song as Van Zandt must have done a thousand times -- a man, his guitar and little else.

Interestingly, this was Earle's approach to much of Townes, even when the album's production doesn't make it obvious. All but four of the tracks were recorded by Earle, alone with his guitar in his apartment. He has said he wanted the songs to be as close to his memories of Van Zandt as possible.

Additional instruments were added later to give the songs the sound they have on the album.

However, some of the songs take a very different feel than Van Zandt might have lent them. Earle recorded "White Freight Liner Blues," "Delta Momma Blues" and "Don't You Take It Too Bad" in Nashville with a bluegrass band.

And then there's "Lungs," which features production from John King of the Dust Brothers and guitar from Tom Morello of Rage Against the Machine and Audioslave. With Morello's one-of-a-kind shredding electric guitar and King's beats, the track isn't for Van Zandt purists.

It does, however, retain the fright and desperation that was often present in Van Zandt's work. If the spirit of the song is unchanged, what's wrong with a new arrangement?

Some of the lighter moments on the album come when he incorporates family. Wife Allison Moorer sings harmony on "Loretta," probably the happiest song on the album, and "To Live Is to Fly." The latter is another well-known track with which Earle wisely does little tinkering.

In the end, though, there's little anyone can say about Earle's handling of these songs. He learned them sitting at the feet of the master, so he has a better idea of what to do with them than any of us. Rearranged or unchanged, well known or obscure, pretty much every track on this album works just as it is.

If you want to argue that, I'll stand on your coffee table in my Chuck Taylors and say that.

The album is a tribute not only to Van Zandt, but also to Earle and the friendship working relationship they shared. It's an album that a fan of either performer (and there's a lot of overlap there) must own.

It's also a good introduction to anyone interested in either man's work. You can hear the poet Van Zandt and the performer Earle.

While it's tough to whittle such a good album down to a few essential tracks, "Pancho and Lefty," "Mr. Mudd and Mr. Gold," "Loretta" and "Colorado Girl" make for a good starting point. But the list could go on for 11 more songs. This isn't one to be downloaded one-at-a-time. It's a good album, start to finish.