The longest day: Back at the track 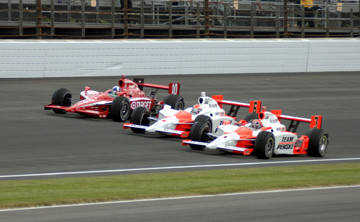 Helio Castroneves (3), Ryan Briscoe (6) and Dario Franhitti (10) lead the field toward the green flag (the first of two).

I'm returning to my sports roots for the day to chronicle my trip. What follows is the day, through my eyes. Don't expect straight reporting, because you just won't find it here.

5:45 a.m. -- Leave Greencastle. Would have been on road sooner, but a certain sports editor needed McDonald's.

You have to be kidding me. After last year, I was planning for at least three hours.

7 -- I try to argue with a state trooper who's attempting to get me around traffic.

He insists I get out to the left lane, and I try, in vain, assisting that I stay in the right lane. Thankfully, his argument wins and I get right in.

I guess that media parking sticker on my windshield really does mean something.

A note to the nice state trooper: Thank you for your help. I'm sorry I'm such a moron.

I don't know what got us on the top floor of the media center with all the bigwigs, but I hope we don't mess it up. Bring on the caviar and champagne!

Noon-ish -- Some cat in the media center restroom is using the stall as a phone booth. During my time in there, he's on three different calls.

Some of us are trying to work.

1:12 -- The Andretti luck hits a new low -- Lap 1. At least for Mario and Michael, they'd lead the way for a while before things went south.

1:21 -- ALL RIGHT! Two young dudes who can't stand each other. Maybe this is just what open wheel needs -- hatred!

Also, I get it, Mario Moraes is only 20, but does being old enough to drink make Marco grizzled enough to say, "If the kid doesn't get it I guess he never will"? That's something we ought to hear out of Eddie Cheever in the booth.

1:50 -- Will Power is officially my second-favorite racing name of all time. My No. 1? Not sure if I can say it here. This is a family site.

Just visit this page to find out.

2:12 I'm a sucker for the familiar last names from my youth hear at the Speedway. So at this point, I'm only shooting 50 percent.

That leaves me with A.J. Foyt IV and John Andretti. I don't like my chances.

Any young Unsers or Bettenhausens out there?

2:48 -- And another contender bites the dust. Tony Kanaan is a genuinely great driver and great guy and he can't buy a break at this track.

I also feel for my photographer. It happened in his turn, but he's out of the heat for a while, spending time in the media center.

I guess Kanaan's not the only one who can't buy a break.

3 -- Halfway there. What a weird race. Can't get a feel for anything.

I guess you have to say that Ganassi's strong and Penske's strong (Except Ryan Briscoe). After that, I don't know. I think Michael Andretti's entire team has inherited his luck. Sure, Danica's still running, but she just dropped four positions with a bad pit stop.

Contrast that with Dixon. Debates on whether or not to come in. He does, and they find a big piece of metal in one tire. Still leading.

Some guys have the magic touch.

3:05 Seriously, how can anyone dislike Kanaan? Time after time, things fall apart for him at Indy. And what does he do after checking out of the medical center? He gives a genuine smile and tells his son "Hi."

3:25 -- There are all kinds of theories out there about what the IRL needs to do to return to the prominence open wheel once enjoyed in this country -- lack of innovation, no speed records, few American drivers.

Here's my thought: The IRL needs a villain. I'm not talking about a universal villain, but someone who you either love or hate. For example, no NASCAR fan lacks an opinion on Jeff Gordon. Also, take the sport back 40 years and you were essentially a Mario guy or an AJ guy.

My dad liked both, and I never understood it. I wonder if he just wanted to tick everyone off.

But anyway, this sport needs that person. It could be Danica, but any argument against her comes off sounding essentially sexist. And, in many cases, I don't think that's totally off the mark.

I'd love it if this Andretti--Moraes thing developed, but Moraes' best finish in two years is 21st. That would have to improve.

3:31 -- Vitor Meira is the closest thing to a hockey player this sport has. This guy gets engulfed in flames; never leaves the cockpit; returns to the track; and never loses a lap.

Yet another job I lack the nerve to do.

3:42 -- A new development in my hope for a good rivalry: Briscoe jumps the restart to pass Danica. But the officials give her the position back. Remember when these two collided in the pits last year?

I hope this isn't the last time the cross paths today...

4 -- Brent Musburger: "Helio Castroneves is trying to jump from the clutches of the IRS to the top of the IRL."

Really, Brent? You are one of the most renowned sportscasters in American and you turn 70 years old in two days. Isn't that joke beneath you?

Then again, it got a big reaction in the media center. If he wins, I wonder how many of my colleagues will steal that joke?

The figure will be in the dozens, if not hundreds.

4:11 -- Sometimes you forget how dangerous this sport can really be. We have no idea how Vitor Meira is after his crash, and it's scary. I can tell you that this newsroom filled with grizzled vets (I'm not one) went silent.

4:14 -- Word that Meira is alert but complaining of some sort of pain. In a situation like that, pain is good news. Feeling something is good news.

Hate seeing a tough dude like that out of the race.

4:19 -- OK, it's go time. We have two former winners in Castroneves and Wheldon followed by the sport's most famous driver in Patrick and good young driver in Will Power. This should be fun.

So this guy has some miles left in him. And he's one of the few about whom you don't hear NASCAR rumors. Where will his Indy career take him? I don't know, but I want to see.

<5:29 -- We've reached that strange point in the day where the action's all over on the track and in the stands, but the hard-working professionals who cover the race for you are at the most intense point in the day.

For three hours or so, the best you can do as someone writing the story is keep notes and see what develops. Once you actually know the winner, things go manic. Write the story. Get as much info in it as possible in the shortest space and time possible. And keep it accurate.

It's kind of strange. Like the rest of the speedway, the media center falls mostly silent at this point in the day, but for very different reasons. Rather than growing vacant of people, it just grows vacant of all the fun and joking of the rest of the day.

It's time for business -- serious professionals doing their jobs. It's really something to see, actually. There will be hundreds of accounts of this race and every one will be a little different. It's one of the intriguing parts of this job for me. There's only one set of facts and yet there can be so many unique accounts.

But anyway, that's about all from here. Be sure to jump over to the sports page and read Caine's race story for a more serious take on the day.