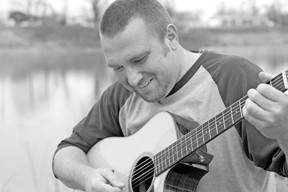 When you pop a new CD into your stereo, you may expect a lot of things. You may want to laugh or want to cry. You may be ready to rock or to just chill out.

Rarely do you put on a new record and come away with a new friend. But that's just the way a listener feels after a spin of folk artist Heath Eric's Finally Gettin' It, out now on Rumsey Records.

From this background begins Eric's personal conversation with his listener. The album's title indicates that Eric has tried other directions in his life, but has realized that music is his true calling.

From the opening notes of "Cool Waters Flow," Eric takes listeners far from the rat race that dominates most of our lives, to a lazy riverbank somewhere in Kentucky. Like the willow tree of which Eric sings, we are able to spend a few minutes next to the cool water of the river.

The opening track also establishes the musical relationship that is one of the album's strengths -- Eric's guitar and the fiddle and mandolin work of Randy Lanham. The slow and easy tones of the instruments serve as a constant music that this music is about an easy-going and light-hearted life.

That's not to say that all of Eric's songs are happy. While tracks like the opener, "Hand In Hand," "The Dreamer" and "Hearts and Skin" offer a positive view of the world, "Pretty Good Mess" is about the narrator's self-destructiveness. "Rock Bottom," the album's most rocking track, takes the listener to an even darker place.

What ties all this together is it seems to come straight from the heart for Eric. Even "Hand In Hand," "Coffee and Cream," "Old Songs" and "Happy Right Now," all of which were written by others, fit perfectly and seem to tell Eric's story.

The album gets really personal as the end nears. "Me and My Boo" and "Fishin' in the Creek with My T" are purely love songs written from a father to his two sons.

At the end of "Me and My Boo," Eric's son Jaxon, who duets with his dad for much of the song, yells out "I Love You, Daddy," at the track's end. In the ensuing silence, it's hard not to get choked up.

The album ends, fittingly, with "Happy Right Now." In the track, penned by Marque Payne, Eric croons, "So I've made up my mind to take this vow/ I'm gonna be happy, right now."

Isn't that what it's all about? Life is tough sometimes, but deciding to live for today is the first step to being content with it all.

Given that he's a bit more experienced than most artists by the time of their debut release, Eric offers a much different perspective than most. He gives the contentment of a man who's seen tough times but come through them stronger. He also offers the perspective of a parent -- someone who understands what's important in life.

Pick this record up for a new artist with a mature outlook on life. Fans of good country-folk music will enjoy this one. The album is available on CD at cdbaby.com or on MP3 at digstation.com or iTunes.