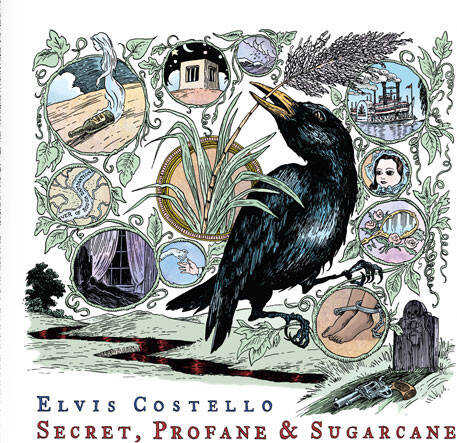 Elvis Costello has worked with almost everyone. You might call him an even more eclectic version of Willie Nelson.

That his path has crossed with so many musicians from so many genres is no accident. Costello seems to understand that the key to a good album is good people who understand the music.

So it should be no surprise that on his new record Secret, Profane and Sugarcane, the ever-evolving Costello has surrounded himself with some heavyweights of traditional American music.

There you go -- good people are associated with a good record.

And Sugarcane, released Tuesday on Hear Music, is certainly a good record. While English artists don't record a lot of country music, it should come as no surprise from Costello.

Commonly associated (inaccurately) with the punk and new wave movements early in his career, Costello has never been easily defined by genre. And God bless him for it.

He could most accurately be described as alternative ... alternative to almost everything.

But this album is definitely a traditional American record, with it's strongest points coming when it's at it's darkest or most poignant.

Lead single "Complicated Shadows" is a crime ballad, that in the tradition of old country, leads to ruin. "Down Among the Wine and Spirits" is about a struggle with alcoholism. "Sulphur to Sugarcane," which takes its name from a couple of towns in Louisiana, is in the voice of a crooked political campaigner.

Contrast these, though, with the beauty of tracks like "I Felt the Chill," "She Handed Me a Mirror," "The Crooked Line" and "Changing Partners." The latter two songs help the record reach its emotional apex in the last two tracks.

"The Crooked Line," to which Harris lends the most beautiful voice in country music, is beautiful number about the longing for true love. Taylor's accordion is out front on this one, giving it a New Orleans feel.

"Changing Partners" is a popularized by Bing Crosby. In it, the narrator feels he's found true love, lost it, and longs to find it again.

Costello's name may be on the record, but this is a team effort. Burnett's fingerprints are all over it, but so are the entire band's. The dobro playing of Douglas is especially notable, putting its touch on nearly every track.

All too often, artists in middle age become shadows of themselves. For Costello, his continued reinvention of his sound makes this impossible.