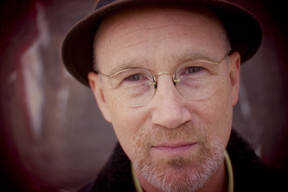 Too much can be made of a work of art's title. While it can certainly describe what lies within, sometimes an album just needs a name.

With Marshall Crenshaw's Jaggedland, released June 2 on 429 Records, the artist says the album title describes the current state of his brain and consciousness. That may well be, as the album, which never moves beyond medium speed, travels through the melancholy, yet hopeful recesses of Crenshaw's mind.

We find him pondering the state of the world, mortality and love. But it's not the warm and fuzzy kind of love in most pop music; it's the "love is hard work" kind of music that fits a 55-year-old with more grey than brown in his beard.

But the sound of Crenshaw's music is anything but jagged. His voice is as smooth and strong as it's every been. And the arrangements, particularly Crenshaw's guitar work, has an understated yet virtuosic quality that can only be described as smooth.

Crenshaw, who has enjoyed more critical acclaim than commercial success in his 27-year career, is remembered by most casual listeners for his 1982 self-titled debut, which featured the top-40 hit "Someday, Someway," as well as "There She Goes Again." He also portrayed Buddy Holly, to whom he was compared early on, in 1988's La Bamba.

Crenshaw has actually spent more than a quarter century producing an output of consistently good music. It's just flown under the radar for much of the time.

It's been six years since listeners last heard from Crenshaw in his 2003 release What's in the Bag? (Unless you count his co-writing of "Walk Hard" for the John C. Reilly film of the same name.) Jaggedland rewards Crenshaw fans for their wait.

Some of the album's strongest moment's lie in its mature love songs. On "Long Hard Road," the narrator admits that love is tough sometimes with, "Being you and me sometimes takes its toll," but also says he wouldn't want to be there with anyone else: "I'm glad that I've had your hand to hold / Along the way down the long hard road."

"Just Snap Your Fingers" tells of the same sort of devotion as "Long Hard Road," but in a much more upbeat package.

If listening to the songs alone doesn't reveal how personal they are for Crenshaw, his comments about the record certainly do.

"This album took a lot of wear and tear on my emotions, but in the end I think it's one of my best ever," Crenshaw said. "When people ask me why I keep making music after all these years, I have a simple answer: because I have to."

But the entire album isn't so introspective. "Eventually" is a good song for the current economic and political climate. Although he looks around and sees a lot of troubling going on, Crenshaw reminds himself and his listener, "This storm will cease to be / Eventually."

"Gasoline Baby" is an ecological tune about our consumption of exactly what it says.

The aforementioned track as well as the title track also put on display Crenshaw's continued musical exploration after all these years. "Jaggedland" is an instrumental featuring a string arrangement alongside electronic sounds. "Gasoline Baby" is sort of stream of consciousness that weighs in at under two minutes.

If the album has a fault, it's that it's almost too smooth. The tempo never really steps up from the opener "Right on Time." While the mid-tempo numbers are nice, and Crenshaw's muted guitar solos pop out like hidden treasures, some of the tension of the album begs for a loud rocker.

It could be a bit more "jagged," if you will.

For whatever faults the album as a package might have, Jaggedland remains a solid collection of songs. The album may lack a transcendent moment, but there are no tracks worth skipping. You can put it in the player and enjoy all 12.

For those who prefer the piecemeal variety of download, highlights include "Long Hard Road," "Eventually," "Passing Through," "Someone Told Me" and "Sunday Blues," but those only have a slight advantage on the rest of the field.

This album makes for a good listen on a quiet summer afternoon. Just pop it in and enjoy nearly an hour with one of our best songwriters. You won't regret it.