Side project a long time comin' for Hood 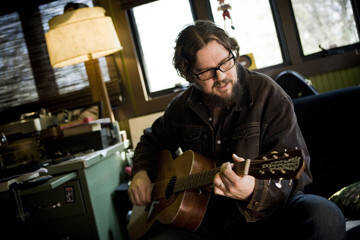 Never one to hide his emotions, Patterson Hood wears them on his sleeve again on Murdering Oscar (and other love songs), now out on Ruth St. Records. (Photo by Jason Thrasher)

For Patterson Hood, Tuesday's release of Murdering Oscar (and other love songs), his second solo album, has been 15 years in the making. In the time since he first began work on some of this batch of songs, his band Drive-By Truckers has released eight albums and Hood has released another side project.

But his attention kept returning to this collection every few years.

Over the years, what began as a project by a struggling young musician who had just moved to Athens, Ga. was added to and reworked by an ever maturing and more successful artist with new priorities in his life.

Hood was conscious of these contradictions and arranged the tracks in such a way as to reflect them.

"When I started compiling the songs, old and new, together, I was surprised to see that the songs not only seemed to fit together, but they also seemed to work as a sort of point / counterpoint, as they almost seemed to stand in opposite points of view," Hood said of the album.

The record's fourth and fifth tracks are the most obvious example. "I Understand Now" was written in 2002 not long after Hood moved in with his wife. It tells the story of a couple of male relatives who had settled down with women, seemingly against their own will. In a relationship of his own, Hood gives a nod to these other men and to growing up: "I'm not sure if I understood then, / But I guarantee I understand now."

"This is absolutely one of the most unabashed positive songs I have ever written and major credit goes to by beautiful wife Rebecca for the state of mind that inspired it," Hood said.

On the other hand, there's "Screwtopia," which tells another story of settling into domestic tranquility. However, it was written eight years earlier at a time when this was a foreign idea to Hood. Delivered to much darker tones, it contains lines like "Keep you happy and sedated. / Who needs to be liberated? / You've got me. You've got me."

It's this balancing act that moves much of the first half of the album. The title track opens it in the darkest place possible. It's a murder ballad in which the narrator decides to forgive himself for his sin. From there, the album moves to "Pollyanna." Hood said it was written after realizing his first marriage and old band were done for. However, it's a song of realizing that things may be sad, but that a bad part of life is over.

The tempo quickly drops for the piano ballad "Pride of the Yankees," which was the last song written on the album. Like a number of other songs on the album, it was informed by Hood becoming a new father back in 2004.

"Bringing a baby into this crazy post-911 world is terrifying and this song is my attempt at making some sense out of it," he said.

The point / counterpoint motif dissolves a bit over the album's second half, as it becomes more of a consistent downer, but there are still rockers to keep the tempo up.

The 10th of the 12 tracks, "Heavy and Hanging" is one of the strongest tracks on the album. A song about suicide, Hood wrote it shortly after Kurt Cobain's body was found. But it's more than about a heavy topic, the song seamlessly mixes some heavy guitar work by Hood and Will Johnson with a cascading piano from Scott Danbom on the chorus. It's a sonic assault that features the best guitar solo of the album.

"Without naming names, it could be argued that the song is sung to the daughter of a famous rock and roll widow who is often more famous for being notorious than motherly," Hood said. "For the life of me, I don't know what draws me to write about some of this."

Patterson Hood must be a terrible poker player. He can't help but tell you exactly how he feels. Fortunately, this heart-on-sleeve approach makes him a top-notch songwriter. His happy songs are infectious. His sad songs are tragic.

Nowhere is this transparency more evident than on "Back of a Bible," the final song on the album. Hood was staying in a hotel when a song came to him. He had nothing to write on except the back pages of a Gideon Bible.

He quickly scribbled down the lyrics, but then realized they weren't very good. He then turned the page over and wrote "Back of a Bible" about the experience. It's become a live staple and has finally made its way to a recording.

Murdering Oscar (and other love songs) shows us this isn't a new development. Hood has apparently been writing heartfelt, quality music for almost two decades now. While the album shows an increasing maturity, it also reflects a consistency of quality. It's another southern rock/alt-country gem from Hood and is worth a listen from fans.

Murdering Oscar (and other love songs)