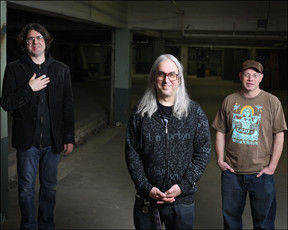 The boys in Dinosaur Jr. have reason to be smiling these days. Lou Barlow, left, J Mascis, middle, and Murph just released their second album since their 2005 reunion, and their sound is as strong as ever.

Since reuniting their original lineup of guitarist J Mascis, drummer Murph and bassist Lou Barlow back in 2005, indie rock vets Dinosaur Jr. have stuck to simple formula: If it ain't broke, don't fix it.

That was apparently the theory for 2007's Beyond, the first studio album from the original trio since 1988's Bug. Based on the sound, the record could have been a lost collection from 1989.

Barlow and Murph were still the tightest rhythm section in indie rock, and Mascis was out front, laying down loud, melodic guitar work on his Fender Jazzmaster. It was a collection of nine songs penned by Mascis and the obligatory two Barlow songs mixed in nicely.

It was, in short, quintessential Dinosaur Jr.

As predicted in this very column after an April show, Farm, released June 23 on Bloomington's Jagjaguwar Records, doesn't miss a beat.

Mascis shares a songwriting quality with some other songwriters of his era. (Black Francis, Bob Mould and Paul Westerberg come to mind.) He can write quality pop songs with accessible melodies and lyrics, only to disguise them with mean, fuzz-laden guitar rock.

It's a great talent to have, and what separates the great garage rock bands from the good ones.

These talents are on display, sharp as ever, in the sounds of "Over It," "Pieces" and "Friends," all three of which feature great opening riffs that let you know this isn't a track to be skipped.

These tracks could have been produced at almost any point in the band's 25-year existence.

That this development didn't come sooner should be a slight surprise to fans of the band's live shows. Mascis obviously has a gift for noodling guitar work, and he's often put his ability in extended solos on display while on stage.

Now we also have evidence of this ability in recorded studio form. It's a gift to fans that's long overdue.

Farm is a good addition to any fan's collection. They've toured twice and released two albums since the reunion. Apparently it's working. They may no longer look the part, but the old energy for the music remains.

We can only hope that the divisions that drove them apart originally don't creep up again.

The record shows just the right mix of maintaining what works while continuing to grow, even after a quarter century.

For the single-song download crowd, I'm not sure where to start. It's a pretty even effort across the board. "Over It" and "Pieces" would make a good start, along with the more ballady "Plans." "I Don't Wanna Go There" shows the group's ability to play for nearly nine minutes (43 seconds longer than "Stairway to Heaven"!) and never get boring.

For new listeners, begin with the old essentials, either Bug or You're Living All Over Me. But if you like what you hear, work your way back to this latter-day gem.