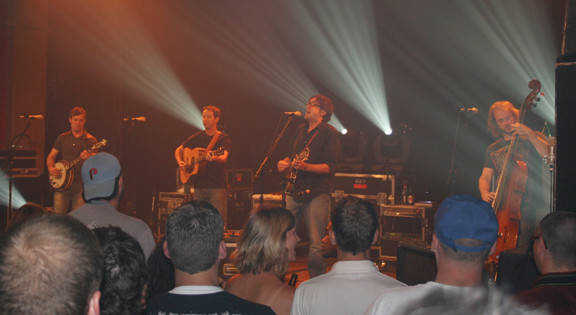 "We'd like to play two sets for you tonight -- keep you up real late," he said.

Keep us up late they did. The band took the stage at 9:25 p.m., took a short break around 11, and the encore was coming to a close right around 1 a.m.

This band has made its reputation over the last 10 years largely with touring rather than studio work. It showed on Thursday, as the concert didn't come across as a platform to sell CDs. This group was here to entertain us RIGHT NOW.

The only tracks from 2006's self-titled release, their most successful studio effort to date, were "How 'Bout You?", which Austin described as "our radio hit" and the short instrumental "Fastball."

But this wasn't a show about "hits" or even about particular songs. Their reputation on the road is that of a jam band, rather than the pop/rock oriented bluegrass of their studio work. One song flowed into the next and a single song might go on for 15 or 20 minutes.

For those of us lucky enough to be in that old theater, it was about watching these four men work together. They are just what they say: a four-piece string band. There are no drums, no wind instruments, no piano.

With that in mind, rhythm responsibilities fall squarely on the shoulders of standup bassist Ben Kaufmann. Kaufmann performs wonderfully, holding it all together for the group while never interfering with the solo work.

The bassist never took a backseat, though. He shared most of the lead singing responsibilities for the night with Austin. The duo also composed the animated half of the stage, chatting up the crowd, cracking jokes and making timely references.

"In honor of the passing of the King of Pop, we've all decided to become smooth criminals," Kaufmann said. "So keep an eye on your woman and your wallet."

But the results were there just the same. During a banjo solo, one's eyes went to Johnston, but you could barely see him moving. How that little movement gets that kind of sound from an instrument is truly a mystery.

Likewise, Aijala might be the best musician in the band, but he's too busy just playing to draw attention to himself.

But the night's star had to be Austin. Mandolin may be his instrument of choice, but he has a big streak of guitar god in him. Playing a blistering solo isn't enough, the music moves him to dance, stomp, headbang and contort his face into previously unimagined shapes.

And every bit of it was a good time for all.

Perhaps the most impressive thing about this band, though, was simply watching the four men work together. Kaufmann, as mentioned, is the constant backbone, but during the extended jams, he had help. Among the three other musicians, one would solo while the other two backed him up for a while. And then, with just a look, the lead would pass from Austin to Johnston, then Johnston to Aijala. And then all over again.

It was so simple and yet so impressive to watch.

And that's the best word to describe a show by these four -- impressive. They are impressive in their energy, their musical ability, their range of styles.

Most of all, they're impressive in their ability to show a crowd a good time.