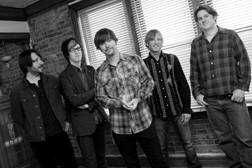 Residents of any industrial town from Pittsburgh to Detroit to St. Louis who can listen to Son Volt's "When the Wheels Don't Move" and not feel emptiness in the pit of their stomachs need to give it another listen.

When lead singer Jay Farrar says there's "No way to keep the wings in flight / When the wheels don't move," he's expressing the thoughts and stresses of people in embattled industrial towns across the heartland and the nation (Greencastle included).

Upon first listen to Son Volt's American Central Dust, released July 7 on Rounder Records, one might ask for a few more upbeat tracks. But upon further listening, one realizes this wasn't the point.

Farrar wrote his latest batch of songs during the summer of 2008 -- a time of unprecedented gas prices and the uncertainty of a pivotal election later in the year. It wasn't a happy time for the country, and Farrar lets it show.

As always, though, the Belleville, Ill. native also lets his background show in his writing. There's the aforementioned desperation of industrial towns and there's also the Mississippi River ("Sultana" and "Pushed Too Far"). Farrar is a product of his environment, and his environment isn't necessarily a happy one.

But the album also has its bright spots. It opens with the charming "Dynamite" which says "This love is like celebrating the Fourth of July with dynamite." Sure, the danger is still there, but it remains a beautiful sentiment.

The album also closes with a more upbeat, accessible number in "Jukebox of Steel."

"Cocaine and Ashes" is a sad piano and fiddle number, but this tribute to Keith Richards is an uplifting song in its own way. The title derives from Richards' story, later revealed as a joke, that he snorted his father's ashes.

"I was actually kind of moved by Keith's idiosyncratic demonstration of love for his deceased father,' Farrar said. "That's Keith's way of doing thins; doing drugs is what he knows. Ultimately, it's supposed to be an empathetic song, and I hope it comes across that way."

The brightest spots, though, are more musical than lyrical. Son Volt has traditionally been a shifting lineup that's been an outlet for Farrar's music. Be that as it may, Farrar needs to hold this lineup together, as it features some of the sharpest playing of the band's six albums.

Especially notable are the performances of lead guitarist Chris Masterson and keyboardist/pedal steel guitarist/lap steel guitarist Mark Spencer. Masterson's guitar dukes it out with Spencer's Wurlitzer throughout lead single "Down to the Wire" and the result is magic.

"Dust of Daylight" is the album's most straightforward country number, as Spencer's pedal steel mixes it up nicely with the guest fiddle work of Eleanor Whitmore.

It all comes back, though, to the reality of the songwriting. The instruments mix nicely with Farrar's raspy voice, which serves as a fitting vehicle for his songs of the struggles of the Midwestern Everyman.

American Central Dust has its hits and misses. Farrar has rarely hit the mark quite as well as on "When the Wheels Don't Move" or "Cocaine and Ashes."

On the other hand, I want to love "Sultana." It's a history lesson. It's a shipwreck song. I love both of these things, but, ultimately, it doesn't quite work. They lyrics don't fit the music and they seem forced.

The music is good throughout, though. Fans should by all means still pick this one up. Additionally, if the current lineup can stick together, future albums just might strike gold.