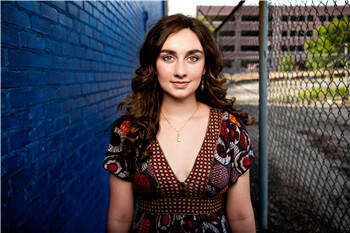 When Haley Dreis sings about "Dancing to a Symphony" on the second track of her debut album Beautiful to Me, she isn't just throwing out fancy terms. The track, which namechecks Mozart and Beethoven, was written and performed by someone who has studied classical violin since she was six.

The twist is, Beautiful to Me is a pop record. Looking back on her background, Dreis isn't sure how she got to the current point, except that, at its essence, all music is related.

"Crossing over to the pop world is difficult as a classical musician," she said in a recent interview. "I'm not really crossing over because I think that music is just the base and it extends into different genres and whatever your interests are. Just because I do pop music doesn't mean I'm not going to do classical ever again."

She won't deny, though, that her singer-songwriter approach marks a distinct shift of gears for someone who's been in the classical world.

"I've been immersed in the classical music realm, which is a very different feel. I think it's more cutthroat, fierce, competitive," Dreis said. "But at the same time, you get a lot of background in theory and history. I feel like I'm well versed enough to write a song. I'm comfortable with melody. Playing the violin has helped me with melody lines."

The base classical violin has provided Dreis is evident in a record more refined and musically complex than one might expect from a 19-year-old college student who has been writing songs for less than two years. Songs like the title track, "Crying Out for You," "Take Away the Pain" and "I Will Heal You" sound as though they have to have been written by someone much more experienced.

But what Dreis may lack in age and experience, she makes up for in drive. She is a double major in music and journalism at the University of South Carolina and is spending the summer promoting the album and looking for a label. When asked when she sleeps, Dreis could only laugh.

"That's actually a big problem for me. Multi-tasking has always been a real discipline that I've been trying to get down myself," Dreis said. "I tend to over extend myself in general, but I have always been able to focus as a musician. I think that's always been a core focus in my life."

"It's really interesting because I started songwriting a year ago, and this was all after I started writing for the Daily Gamecock. I guess it must have sparked my interest," Dreis said. "I would always ask, 'How do you write a song?' I craved that kind of information. It's kind of inspirational because most people's stories are 'I started at the bottom, rising to the top.' That kind of gave me a little bit of hope when I decided to pursue it."

And once the songwriting started, Dreis went at it the only way she knows how: all out. She taught herself to play guitar over winter break more than a year ago and also wrote her first song. After recording the song with some friends, she had to have more.

"I was like, 'Wait a minute; this is awesome. This is so much fun,'" she said. I decided maybe I should continue writing songs for fun. Over that summer I wrote a song a day. I really pushed myself to focus on that."

The record shows the fruits of all the work. Dreis has a knack for writing accessible pop without being formulaic or mimicking someone else. One doesn't coming out of listening to this record thinking it sounds like this artist or that artist.

It sounds like a Haley Dreis record. For a debut, that may be the most important quality to possess.

With Beautiful to Me, Dreis proves herself to be a young artist to be heard. The songs are well written lyrically and musically, showing the artist's background as a writer and musician. She also shows herself to be adept on the violin, guitar and piano as needed.

The album also changes speeds well, moving seamlessly between ballads like "Dancing to a Symphony" and "Crying Out For You" and upbeat numbers like "I Believe In Love" and "Other Side."

The album's high point comes late in the running, with three straight gems in "I Will Heal You," "Beautiful to Me" and "Take Away the Pain." The three show a depth of emotion and a range of style and tempo.

For anyone wanting to hear a new voice in pop music with a maturity and knowledge beyond her years, Beautiful to Me should be checked out.

The album can be purchased here and should be available on iTunes later this month.