The Features toe the lines of genre 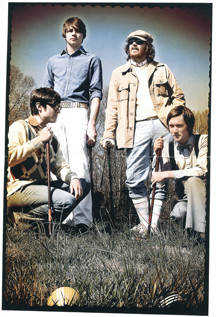 The Features knock it through the wickets with Some Kind of Salvation.

Perhaps the most telling fact about Some Kind of Salvation, the second full-length release from Murfreesboro/Nashville, Tenn.'s The Features is the issuing record label. One of the names on the label is Kings of Leon, Georgia's darlings of the indie/southern rock scene for more than half a decade now.

Just like the Kings, The Features play a winning blend of genres that touches on folk, pop, alternative and straightforward rock. The resulting mix maintains the band's indie credibility while producing what should be several radio-friendly songs.

The question is, though, will the music-buying public catch on?

It's not as if commercial recognition would be an overnight success story for this foursome. The group has been playing around Murfreesboro and Nashville since the mid-'90s, building a rabid cult following, but failing to be noticed by the larger indie culture.

Even signing with Universal and great critical reception of 2004's Exhibit A was derailed by disagreements with the label.

However, by signing with the newly formed Kings of Leon/Bug Music/429 Records imprint, the band seems to be right at home and making quality music.

The lead single on the album "Lions", kicks off with a catchy round of nonsense-syllables accenting the beat and melody. The "Oh's" and "Ah's" may not have any meaning, but they provide one of the catchiest hooks on a catchy album.

But to only notice these would be to sell short the lyrical and vocal prowess of songwriter/lead singer/guitarist Matthew Pelham. Pelham's lyrics hit close to home, almost always telling his own story.

"I'm not very good at writing stuff that I don't know anything about. There's so many people that write about abstract things ... you don't understand what they're talking about at all," Pelham said. "I like that stuff, but I kind of prefer songs that are a little more straightforward."

One of the album's high points comes in just such a number. On "The Temporary Blues", Pelham conveys the desperation of taking a job because you have to.

Time comes when you have to choose

An occupation you can use.

Well, they say it should be something you like.

A poor boy to be choosy how he provides.

How you get by.

The lyrics aren't pulled from thin air, but from Pelham's experience working in as a temp in a Pillsbury factory. The desperation in his voice as he belts out lyrics about simply waiting for break time is very real.

The music, particularly the contribution from the rhythm section of Rollum Hass (drums) and Roger Dabbs (bass) puts the track over the top.

The most ear-catching musical contributions probably come from keyboardist Mark Bond, who has only been with the band since the 2006 EP. A number of songs bring new musical textures over the previous tracks, and in most instances, it's Bond's contributions.

From piano ("Foundation's Cracked") to synthesizer ("GMF") to organ ("Wooden Heart"), Bond seems to use it to great effect on this record.

Outside contributions also add greatly to the album's success, with baritone saxophone and violin both making surprise appearances at various points along the way.

It's this musical adventurousness and confidence that makes the album simultaneously accessible and unclassifiable. The Features approach to music is free and fun, making the music difficult to dislike.

The Features' Some Kind of Salvation shows a lot of polish for a relatively unknown band. However, the band's resume shows they are no rookies. If success doesn't finally come with this release, then shame on record buyers. It's their loss.

As any album, the record has its high points, but none of the tracks are real misses. The band changes tempos and volumes well with rockers like "GMF," "The Temporary Blues," "Wooden Heart" and "Lions" fitting nicely with quieter numbers like "Baby's Hammer" and "The Gates of Hell."

This is an album to be purchased as a whole, but for those who want to start with a taste, "Lions," "The Temporary Blues" and "The Gates of Hell" are good starting points.

But don't stop there. You'll miss out.

Some Kind of Salvation