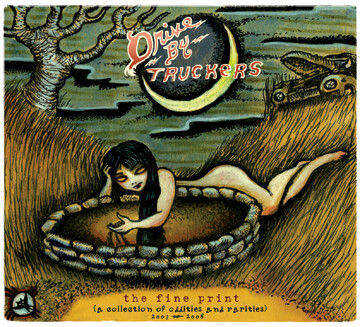 At their best, Drive-By Truckers albums have been an exchange of ideas. With multiple lead singers, the listener gets a number of perspectives on a number of subjects with each album.

It's a sort of roots rock "Meet the Press."

And so it is with The Fine Print (A Collection of Oddities and Rarities 2003-2008), released Tuesday on New West Records. The band spent the bulk of these years with Patterson Hood, Mike Cooley and Jason Isbell serving as co-frontmen, with each one adding his two cents to the mix on an album.

This idea becomes obvious when the group covers Bob Dylan's "Like a Rolling Stone" for the last track of the new record. With four verses, four lead singers take one each. (Bassist Shonna Tucker, who had a couple of songs the last Truckers' album, takes the second verse in what was her first lead vocal performance for the band.)

On the track, each singer gives his or her take on the familiar song. The cadence and timbre of each voice brings a slightly different feel to each verse while the music beneath remains the same.

Finally, after Cooley's fourth verse, all four come together to sing the last chorus.

The song serves as an example of what being in a band should be. While every member brings his or her own style to the group, the ultimate goal is to make the music you all love ... together.

Another instance of the sometimes contradictory voices within this band comes between Cooley's alternate version of "Uncle Frank" on the third track and Isbell's "TVA" on the fourth.

"Uncle Frank," the original version of which appears on 1999's Pizza Deliverance, tells the story of a loner ex-G.I. whose land is taken by the damming of a creek that runs through the hollow. By song's end, Uncle Frank has hanged himself and the promised prosperity never comes to the area

By contrast, in "TVA," Isbell tells of how the organization that ruined Uncle Frank provided a place to fish with his dad, enjoy evenings with his baby and, most importantly, saved his grandpa's family from poverty. His refrain of "Thank God for the TVA" is a far cry from the emotions evoked by Cooley's tale of the damage done by FDR's program.

As always, though, the most prominent voice on the record is Hood's. He weaves more of his patented tales of desperate guys gone horribly wrong on "The Great Car Dealer War" and "Good's Field Road." The latter song appeared on DBT's last album Brighter Than Creation's Dark, but the reworking is almost unrecognizable.

Another DBT trademark has been singing songs about other artists. (See "Carl Perkin's Cadillac," "Danko/Manuel" and pretty much the entire Southern Rock Opera album.) Hood is at it again with "Talkin' George Jones Cell Phone Blues," a tongue-in-cheek commentary on the country legend's 1999 encounter with an overpass pylon.

The album has roughly the same balance of content as the three original records with Isbell in the fold. Besides the final track, Hood takes the lead on seven tracks, with Cooley and Isbell each chipping in two.

For longtime Trucker fans, it should feel something like home.

The Fine Print is a treat for Drive-By Truckers fans. While the band's output hasn't suffered since Isbell's amicable departure, a reunion always feels good, even if it's actually just old material.

The album is also one-third covers, which is strange this band. However, DBT's takes on Dylan's classic, Tom Petty's "Rebels," Tom T. Hall's "Mama Bake a Pie (Daddy Kill a Chicken) and Warren Zevon's "Play It All Night Long" are certainly nice "oddities." They give a glimpse of the band's varied influences and perhaps why it has such a unique sound.

It's dark. It's funny. It's loud. It demands a listen. In other words, it's a Drive-By Truckers album.