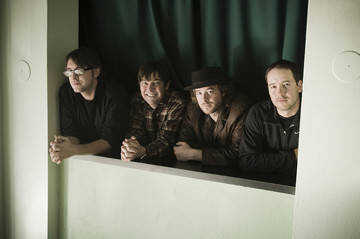 At the mention of string bands, many sets of eyes begin to roll back in heads. People don't want to hear old music on banjos and mandolins.

If there's anything the movement of young string bands in the last few years has taught us, it's that while this music may be played on acoustic string instruments, it's indeed not old music.

While they are just one small piece of the puzzle, Yonder Mountain String Band continues to bend the rules of what this music can be. The Show, released Sept. 1 on Frog Pad Records, continues to take the string band tradition to places it's never been before.

With their 2006 self-titled release, Yonder Mountain brought in rock producer Tom Rothrock. The result was a bluegrass sound at the core, but with rock energy and a catchy bunch of pop songs.

Fast-forward three years and Rothrock is back in the fold. What some of these songs may lack in the previous catchiness, they make up for inventiveness. Bandmates Adam Aijala (guitar), Jeff Austin (mandolin), Dave Johnston (banjo) and Ben Kaufmann (bass) have produced another fine album.

"Isolate" is a prime example. Sung by Dave Johnston, whose deep voice lends itself to darker songs, this track is haunting with its ominous bass line and limited instrumentation. It's a far cry from the lightning-fast picking and nasal singing one expects from "traditional" bluegrass.

Less edgy, but still far from Bill Monroe are tracks like "Complicated," "Belle Parker" and "Criminal," which owe more to the band's rock influences than anything from under the blue moon of Kentucky.

Another aspect of this band has been the difference in their four previous studio albums and their live sets. To hear the studio albums, one would never know Yonder is considered a jam band in concert, with its extended solos and mammoth jams and medleys.

The gap is bridged a bit on The Show, with three songs over six minutes in "Isolate," "Honestly" and "Casualty." The latter two should especially lend themselves to the band's live show. "Casualty" already has an extended instrumental section. One can only imagine this will grow with the live set.

And, finally, traditional bluegrass sounds aren't gone entirely. They underly the entire record and show up especially on the opener "Out of the Blue" and the delightful "Rain Still Falls."

The result of all these songs is a record for the modern listener with traditional sensibilities. These four are amazing musicians and that is display throughout the 13 tracks.

While not as catchy as the last record, The Show still has its poppy moments on tracks like "Steep Grade, Sharp Curves" and "Belle Parker." We also get a nice, tender ballad in "Dreams."

Adding to the quality of any Yonder Mountain record is the ability of all four men to sing lead. They bring four distinct voices to give the album a variety of feelings and textures.

In 11 years together, this band has played by its own rules. This phenomenon continues with The Show. As Yonder Mountain grows as a band, wondering what comes next is the best part of the experience.

The latest step on the journey was one worth taking.