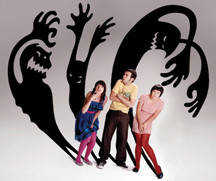 As the end of my third decade closes in, all to often, pop music makes me feel old. I just don't get it and the energy of it seems foreign.

Not so with Teeth Lost, Hearts Won, the latest release from Australian trio The Grates. With layer upon layer of sound, mixed with the energetic vocals of front woman Patience, this album can make the most jaded listener sing along and dance around.

The record was released in the band's homeland more than a year ago, but U.S. buyers got their first crack at the record on Tuesday, when it was released by Thirty Tigers/Dew Process.

The album opens with almost too much energy, with a cacophony of unidentifiable instruments. Make it through the first 10 seconds of "Burn Bridges," perhaps the catchiest song in the 13-song collection, and you are rewarded. Patience's vocals mix nicely with the work of guitarist John and drummer Alana.

Not to say this album is for everyone. A sticker on the front bears the message: "Warning: Moderate impact coarse language and/or themes." The language is mature at moments, but the music itself could be even coarser for unprepared ears. For those seeking simple, easy-to-spot melodies, look elsewhere.

This music has some intricate and infectious melodies for the adventurous listener, though. On the surface, this band may be a three-piece with just two instrumentalists, but one can't tell from the multi-layered sound. While nominally a guitarist, John is actually credited with guitars, singing, keyboards, and accordion. Six additionally musicians and singers are credited on the album.

This little band finds a way to make big sounds.

Credit for these sounds could also go to the band's work at the soundboard, as they've co-produced Teeth Lost, Hearts Won with Peter Katis.

Another sign of maturity comes in the band's expanding sound. In "Aw Yeah," they have a high-energy number that would have fit nicely on debut album Gravity Won't Get You High. Unexpectedly, they follow this with the surprisingly mature "Milk Eyes," a song about becoming a mother.

It's this mix of new themes and what has already worked that should maintain this band's appeal.

Teeth Lost, Hearts Won does exactly what a sophomore album should do. It maintains the strengths of The Grates' debut album, while leaving room for the sound to grow.

This looks to be a band entering its prime. The perfect mix of raw energy with ever-maturing songwriting only lasts so long, though.

Let's hope their back in the studio already.

Producers: Peter Katis and The Grates