Does the President need a Fu Manchu? 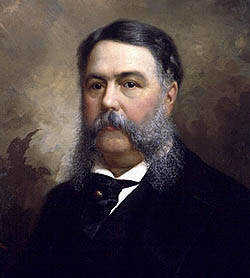 Jared Jernagan's views of history do not reflect those of any history scholar anywhere.

There was a time in this country you could measure a man's leadership skills by his command of the hair follicles on his face. From a Civil War general who had entire style of facial hair named after him (Ambrose Burnside) to a simple lawman in Kansas and Arizona (Wyatt Earp) all the way up to the chief executive, any leader worthy of note had something impressive going on with his cheeks, chin or upper lip.

From the beginning of Lincoln's term in 1860 to the end of Taft's in 1913, only two presidents lacked some sort of impressive moustache, beard or both. And who were these grievous trend-buckers? They were 17th President Andrew Johnson and 25th President William McKinley.

And these two were real winners, let me tell you what.

Johnson: Took over for Lincoln after his assassination. He then proceeded to completely botch the Reconstruction, leaving the south crippled by war's aftermath much longer than it needed to be. He also became the first and only president impeached for a reason that wasn't sleeping with an intern.

McKinley: Presided over the Spanish American War and was assassinated in 1901. That's right, the second most notable thing this guy did in office was die.

And as a bonus we can throw in Woodrow Wilson, who started our current streak of 17 straight barefaced presidents. How did Karma reward Wilson for starting this sad trend? Congress refused to join Wilson's League of Nations, a great idea that was way ahead of its time. And then he had a stroke and spent the last part of his term incapacitated.

The message? WE NEED TO BRING BACK BEARDED PRESIDENTS. The guys who went with this trend accomplished some good things:

Also, he rocked the same Amish-style beard as me. I sometimes wonder if Lincoln, like me, lacked the ability to grow a proper moustache and just took what he could get. I'd like to think we have that in common.

Ulysses S. Grant: He wasn't a great president -- I'll admit that. But as a general, he is the guy who accepted Lee's surrender at Appomattox Courthouse.

Rutherford B. Hayes: OK, Hayes also wasn't that good either. Among presidents, though, he's probably the one best suited to play bass for ZZ Top.

James A. Garfield: Was only in office for a short time before assassination, but he could write with both hands, at the same time, in ancient Greek with one hand and Latin with the other. I could not possibly make this up. I originally read it in Kid City, which was the absolute greatest magazine on earth before I discovered Sports Illustrated for Kids.

Chester A. Arthur: Awarded federal jobs based on merit, not party allegiance. Hey, what a novel concept. What happened to this?

Really, though, Arthur is a hero of mine for having bushy sideburns that connected to his equally impressive moustache, but no hair on his chin. This look was so advanced that I know of only one other person (Spinal Tap bassist Derek Smalls) who has ever pulled it off. And Derek Smalls isn't technically a real person. Way to go, President Arthur.

Grover Cleveland: So awesome that he is both the 22nd and 24th President of the United States. Look through your history books. No one can top that.

Benjamin Harrison: He was from Indiana. That's enough for me.

Theodore Roosevelt: Slightly edges out Andrew Jackson as "Chief Executive I'd Most Like On My Side In A Barfight." Do you want Teddy Roosevelt swinging a pool cue at your head? I didn't think so.

Someone once attempted to assassinate this guy before a speech. The extremely thick manuscript of the speech was in Roosevelt's jacket and slowed the bullet down, thus saving his life. After that, he still gave the speech!

If this guy were president today, he would have ridden his horse to Afghanistan followed by tracking down and personally beating the bejesus out of Osama bin Laden years ago.

Teddy Roosevelt was also one of the best reformers we've had in the office. I suppose that's actually the important part.

William Howard Taft: Weighed 300 pounds. Served as Chief Justice of the Supreme Court from 1921 to 1930. This is way more impressive as a post-Presidential career than writing self-indulgent books and charging hundreds of thousands of dollars just to go somewhere and speak.

So there it is, a sophomoric, semi-researched case for why our country was so much better when our presidents had the guts to grow hair on their faces.

Should President Obama consider this move, he needs to remember what a big hoops fan he is. I highly recommend he go with some 1970s ABA-style mutton chops.

Either that, or we can elect Chuck Norris in 2012.