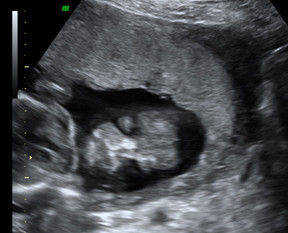 No one get too excited, she still isn't due until July. But we now know the sex.

All along there has been a mix of excitement and fear. (The excitement has gotten stronger and the fear has subsided.) Regardless of what I have felt, though, it's all remained somewhat surreal.

On Monday, Nicole and I had our second ultrasound, and the first in which the baby really looks like a baby. I saw arms, legs, ribs, spine, even a face. I saw a tiny, developing child in there. It was breath taking.

We also found out we are having a boy. I had been told by a co-worker that finding out the sex would make it all more real to me. While that may be the case, I think reality is setting in simply because I could see him so clearly.

He moves around, he covers his face with his arms crossed. He squirms way too much (like me). The ultrasound tech told my wife she probably wouldn't be getting much rest in the latter stages of this pregnancy.

Ever since we found out in November, there's been a growing sense in me of the reality of this situation. It's lagged behind my wife's simply because I can't feel the movement and changes of it all. I think I might be catching up at this point, though.

My understanding of it all took a great leap forward today.