The perks of the job 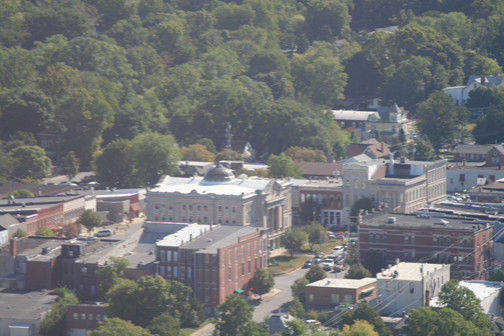 From my desk, I look down at the square every day, but this perspective is a little bit different.

I am not a rich man. (At least not financially.)

This is a fact anyone entering my line of work understands from the get-go. If they don't they are in for a shock.

It's not a reflection on my employer or on the newspaper industry in general that we don't make a lot of money, it's just the way it is. We accept it and get on with our lives.

The flip side of it is, though, my job has its share of benefits. For example, three things that interest me in my spare time are sports, music and politics. I get the chance to cover all three professionally. I have access to these areas that other people don't.

My job can also be a lot of fun.

I got one of those experiences on Friday morning.

On Thursday, I had a couple of phone conversations with Mayor Murray about a proclamation she would be making at the Putnam County Airport. At first, it was just slated as a pretty standard photo of her surrounded by several other people as she read or signed the proclamation.

On her second call, though, things took an interesting turn.

"They want me to go up in a plane, and they'd like you to go up in another to take a picture of it," she said to me. I could hear the reservation in her voice -- not so much that she didn't want to fly, but that she wasn't sure if I wanted to.

I could only say one thing: "Absolutely!"

While I understand lots of people have their reservations about flight, I'm not one of them. I have a healthy respect for the dangers inherent to being hundreds or thousands of feet off the ground, but that's part of what makes it fun.

All I needed at that point was the time and day, and I would be there with bells on.

And so, at 10 a.m. on Friday, I showed up at the airport. We went through the standard shots of the mayor reading the proclamation and airport officials standing around her, but then the real fun began.

We took off and got a brief tour of the city from above. It's funny how perfect everything looks from above. The next time you think your grass is too tall or something around the house needs fixed, check it out from a plane or helicopter. There won't be a problem at all. Your yard looks like a perfect square with a perfect little toy house sitting in the middle of it.

The only moments of stress for me came when I realized I shouldn't have had an extra serving of sausage gravy that morning. (I had been at the United Way Breakfast barely an hour before. The Inn at DePauw makes good breakfast, let me tell you what.) The extra food on my stomach coupled with the slight turbulence and looking through a zoom lens upset my stomach briefly.

But it passed, and I got back to having fun.

It was only a brief flight, but was truly one of the most memorable assignments I've had in recent years. I got the chance, for the first time, to see Greencastle from a bird's eye view. I also got to take a bunch of photos from a perspective I may not get again anytime soon.

So I guess all I can really say is, I have a pretty sweet job.