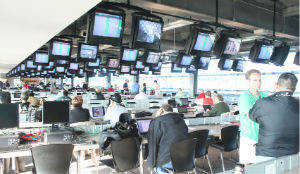 How does the press corps cover the big race? Hundreds of TVs.

After taking last year's Brickyard 400 off (something about a new baby), I'm back at the track for the 100th anniversary running of the Greatest Spectacle in Racing. Keep checking back in for my take on what I see and hear.

4:43 a.m. Strange buzzing sound. That's my backup alarm, the one on the dresser. Why didn't my cell phone alarm go off? Got a new phone yesterday and must have screwed something up. A quick check reveals I set it for 4:39 p.m.

I've got to set that thing for military time or I'll never get anywhere on time.

5:27 Following a shower, coffee and a cup of yogurt (I'll have to get some of the free breakfast at the Media Center), I'm exiting the front door. Nicole woke up with me, but I somehow managed to avoid waking the baby.

6:17 The radio reports "heaving traffic already," so we begin to dread it a bit. Then we remember those idiots always say that.

If you're ever going to a race like this, keep this in mind: the guys on the radio reporting "heavy traffic" are apparently comparing it to 6:30 a.m. on a regular Sunday morning in Speedway, Indiana, not to race day when 200,000 people are trying to cram themselves into this tiny town.

7:16 Parking in the infield. We sat in traffic for maybe 20 minutes on Georgetown Road, and that isn't too bad.

If the guys on the radio really want to talk "heavy traffic," try making the trek in at about 10 a.m. -- that's when the real headaches happen.

7:48 Sitting at my work station thinking this blog is currently going nowhere. My apologies for the 300 words of drivel you've just read. Let's hope it gets better once I have some breakfast in me.

8:26 Foiled by Fox 59. I normally love to eat my breakfast and lunch from the third-floor balcony outside the dinning area. Unfortunately, the geniuses from WXIN have commandeered that spot this year.

I wouldn't mind so much, but this the same channel that hasn't mastered the technology of inserting a weather update onto my screen without zooming the picture in so much that I can't see the score of the visiting team.

9:25 Back in the press room, and it's come alive in the last hour. I've never been clear on what people have to write about at this point in the morning, when we're still three hours from the start of the race.

Are there perhaps others like me? We can only hope not.

With hindsight, we can also say that Al Unser Jr. went on to win that day. Additionally, Eddie Cheever and Buddy Lazier would subsequently win at Indy.

So, for those of you keeping track, 13 drivers in that field won a combined 26 times at Indy. In addition, three-time champ Johnny Rutherford failed to qualify, and Formula 1 champion Nelson Piquet was seriously injured in practice.

To say things were stacked at Indy that year is a serious understatement.

Sometimes I think it's youthful wonder that makes it seem like things were better when you were 11. In this case, I think I'm actually right.

We may never be so lucky as to see a field like that again, but Juan Pablo Montoya and Sam Hornish went to NASCAR. (And let me say, it's just gone swimmingly for Hornish.) There are also a handful of other winners still in their 40s, who could certainly still get around this track fast.

Will we see any of them back here? I don't know, but good lord would that be fun.

And I must say it would be an upward move in Hornish's career from racing part-time on the Nationwide Series.

11:16 They can say all they want about selling this place out. Like most recent years, I see a lot of empty seats.

We'll have to see what's up come green flag time.

11:29 Just saw hard-hitting investigative journalist Rafael Sanchez in the cafeteria. Do you think he's at the track investigating $8 cups of beer?

11:58 In case you were wondering, the national anthem didn't sound better in person.

Anyone want to bring back Steven Tyler?

12:03 p.m. I'll retract my earlier statement. This place is pretty full. Still some empty seats in the short chutes, but I've sat there before. You can't see much.

12:13 Who thinks the pace car driver couldn't still outdrive half the guys in the field?

12:21 I'm currently learning a hard lesson in how reliant we all are on technology. Somehow, we've lost wireless access to the internet here in the Media Center. It only comes at one of the two most important points in the day.

12:24 Access is back. That's good because I was too busy worrying about not posting to actually enjoy a great first few laps. I hope to keep focused on the matter at hand for a few hours.

12:26 Too bad to see Simona de Silvestro struggling so early. The record four women in the race was a good-time story, as was de Silvestro's qualification in spite of second-degree burns on her hands.

12:35 Tony Kanaan's on the move early, which is great to see. I don't know if any driver, besides Castroneves, connects with the fans better. Only Michael Andretti and Rex Mays have led more laps while never winning the race.

Let's hope TK can get off that unfortunate list.

12:36 Tough break for Will Power. Still has the best name in racing.

12:39 Back to handing out more free stuff at the track this year. The economy must be getting better.

12:41 So much for a clean race. After the caution, we couldn't make it through the first turn before E.J. Viso hit the wall.

12:44 It may be cheating at this point, but I'll still make a prediction for this race, as I forgot to about an hour ago. Just because I want to see history, I'm picking Castroneves.

It's never a bad bet. Also, since he's currently running 13th, nobody can call be a frontrunner.

12:50 Tagliani takes the lead back from Dixon on the restart. This is shaping up to be a nice little battle.

Who else will join the fray?

1:02 What's up with the name Pippa all of a sudden? Is it a British thing? A month ago, I'd never even heard the name, and now I know the future queen's sister and her ... uh, assets ... and driver Pippa Mann.

1:26 The racing has been intense at the front. Can the cars hold up?

1:27 Listened to end of a radio interview with Kenny Bräck. History hasn't been kind to the Swedish former champ, but he was so good in the late '90s, giving Foyt his only championship with someone else driving the car.

1:46 Don't think it'll come up, but the race is now official, should any foul weather strike.

2 He may have started third, but I'd mark up Oriol Servia as the first surprise leader of the day.

2:22 First audible groan I've heard in the room all day, as polesitter Alex Tagliani clips the wall. First of the leaders on the day to drop from contention.

2:33 Great restart. We've had our share of wrecks today, but so far, the double-file restarts have been a great success.

Ryan Briscoe, Penske's top car today, ends up in the wall with Townsend Bell. A couple of good cars out of the running.

2:36 The hits keep coming for Penske, as Castroneves -- who was a lap down anyway -- blows a tire.

Between Power's early wheel issue and these last two incidents, we can safely say Mr. Penske won't be adding championship No. 16 today.

2:45 Cautions could change things, but Danica Patrick has way fewer laps on her current tank of fuel than anyone else in the top 10. Could make for some interesting situations down the stretch.

2:48 Graham Rahal to the front. I don't have any real analysis here, but I really wish Graham looked like Groucho Marx, just like his old man.

2:56 Kanaan's been creeping all day. Curious to see if he can make it all the way to the front.

2:58 Patrick in the lead, but she can't make it. Curious to see how they'll work this.

3:09 What is wrong with Dario Franchitti's car? This can't just be fuel conservation.

3:10 The slipper doesn't for Baguette, as he dives into the pits with three laps to go.

Instead, we have 22-year-old rookie J.R. Heldebrand leading the race with three to go.

Dan Wheldon passes him in the home stretch for his second 500 victory.

3:18 You can't help but get a little choked up watching Wheldon in victory lane. Here we have one of just five drivers in this race who has previously won here, yet he doesn't have a ride for the rest of the year. I guess things are tough all over.

In the end, though, we get Dan Wheldon, who is only racing part time this year. He also recently learned his mother has Alzheimer's. Yet he goes out today and becomes just the 18th man to win this race more than once.

On the other hand, I will be pulling hard for J.R. Hildebrand in the future. That was a bad beat.