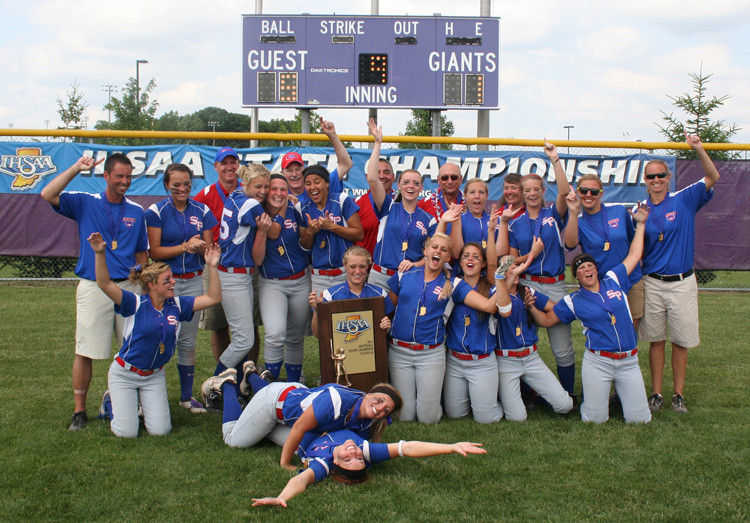 I felt a bit like Kirk Gibson on Saturday.

No, I don't hobble that badly (just yet). And I didn't have Vin Scully describing my actions for millions live and for posterity.

But then again, I wasn't the cause of the excitement.

That honor goes to the South Putnam Lady Eagles, winners of the 2011 IHSAA Class 2A softball championship. As a small-town sports writer, you hope for the chance to cover a high school state champion. We came close last fall with the North Putnam football team. These Eagles got all the way there.

The funny thing is, I'm not a sports writer anymore. Officially, I have not been on the sports staff since November 2008. But I've kept up with the local teams over the last 2-1/2 years, and when I was called on in a big spot, I stepped to the plate.

Somewhere around January, Caine began planning his family's summer vacation. The Gardners were planning to head south for a week or so, and the departure date was set for June 11. Seemed safe enough. That's a couple weeks after the end of school, so the spring sports schedule should also be over, right?

If only it were so simple.

As it happened, the state softball championship was also that day, and the Eagles had designs on playing -- and winning -- that day.

As the tournament went on, Caine apparently approached his wife about leaving later in the day. That did not fly.

So in stepped the wily veteran (who's actually five years younger than Caine) in a big spot. I wouldn't say I hit one over the fence (although Jenna Jones did in the top of the fourth), but I filled in and got the job done.

Sports have a way of distracting us from our worries. It's even more pronounced when it comes from a group of young people within our own community. To see a group of local teenagers win a state title, and win it in the way they did, has truly made this week a joy for me.

I have to get back to the matter of bills, a leaky roof and a wet crawlspace, but through four days of this week, I've been pretty much floating.

Thank you for that, girls.