What a movie should do 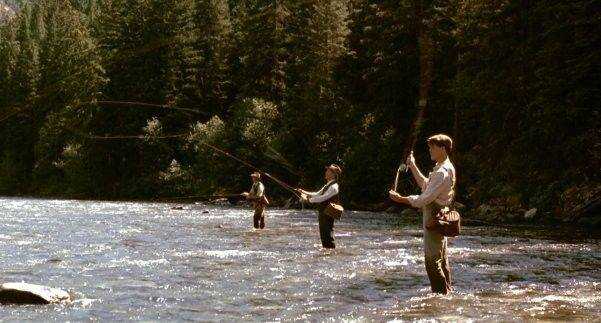 "I am haunted by waters."

When pressed to name my favorite movies, it's a lot of explosions and laughs. As with most people, the list is fluid, but there are a few movies that, in no particular order, always seem to be in the discussion.

* This is Spinal Tap

* Raiders of the Lost Ark and Indiana Jones and the Last Crusade (No temples of doom or crystal skulls for me, thank you)

OK, that last one isn't even a movie, but I own the DVD, and it's been watched more than a lot of actual movies in my collection.

What you find in this list is a combination of action, violence, witty dialogue and rock 'n' roll. When I want to watch a movie, I'm not usually seeking a deeper experience -- I want to enjoy a movie as an escape.

When I want to be challenged, I usually go to a book.

But on Sunday, I was caught off guard by two movies that hit me in a different place entirely when Ion Television consecutively showed A River Runs Through It and Stand By Me.

Now, I have long deeply enjoyed these two films, but in an entirely different way than I could ever enjoy Kevin Bacon and Fred Ward battling giant man-eating worms.

Instead, they both make me stop and take a look at my own life. I think these two work for me in particular because they are both books (novellas to be exact) and I've read both of them. I feel I've connected to the stories in a deeper way than a film is normally capable.

A River Runs Through It, although it really doesn't reflect the relationship I have with my dad and brother, still makes me think of them. There's a lot in there about finding the beauty in those we love, even through their flaws.

There's also the aspect of trying to help someone even when they don't really want it. I think we can all relate to that.

Stand By Me, on the other hand, makes me think of old friends, growing up and saying goodbye. It's strange the way that movie has grown with me. When I was 12, it was just a cool story about some kids going to find a dead body. As I got older it made me recall people who had passed in and out of my life in a flash.

And now I really relate to the grown-up part with Richard Dreyfuss as he tries to gather his thoughts following the death of an old friend. I haven't necessarily experienced it, but I'm finding I can now relate to it.

I don't know what I'm trying to say here except that maybe my list should change a little bit. It's good to get in touch with your feelings once in a while.