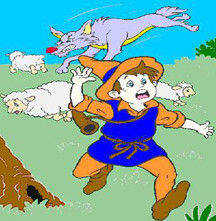 Let's get the story straight.

Part of my morning routine has become watching PBS cartoons with my son. It beats watching sports highlights, waiting to find out how the Reds lost this time.

Teaching kids the concept that reading can teach you lessons about real life is definitely a good thing. I approve.

This morning, Whyatt (AKA Super Why) heard his baby sister say her first word: "Why," his nickname. However, his parents and brother didn't believe him.

So, Whyatt ventures off to Storybook Village for a meeting with his storybook friends Princess Pea, Little Red Riding Hood and Pig (the "littlest" of the Three Little Pigs). Together, they read "The Boy Who Cried Wolf," who has a similar experience to Whyatt's, in that nobody believes him.

As the story is told by the cartoon, the boy sees the wolf multiple times. Every time he calls people to come see the wolf, it departs before the arrive. So nobody believes him. The scenario repeats itself three or four times before the boy finally gets everyone to see the wolf and believe him.

Anyone else see a problem with this? Pardon my poor English, but that ain't the way Aesop told it.

As we all (should) know, "The Boy Who Cried Wolf" was a shepherd boy who got bored and tired of sitting on the hillside all alone. He realized that if he "cried wolf," it would create a stir, get people to come out to the hillside and make him less bored.

He gets lectured on his poor behavior but never changes his ways.

Of course, by the end, no one believes the lying little brat so when the wolf really comes, he cries "Wolf. Wolf! WOOOLF!!!" But no one comes. The wolf eats all the sheep. I think in some more grisly versions, he also eats the boy.

The lesson is pretty simple -- Aesop's pretty good at making it obvious. Don't lie, children. Don't lie or the sheep will die. You might die as well.

I guess all I can say is, "Thank you, PBS, for providing quality children's programming. But please stop messing with classic stories."

I don't want my son growing up not properly understanding what it means to "cry wolf."

(And for anyone who was wondering, Whyatt goes back home and tells his family how disappointed he is that no one believed him. They all apologize, and baby sister finally says "Why" for everyone else. Much like Aesop is good at obvious morals, cartoons are good at tidy endings.)