The tuning out experiment 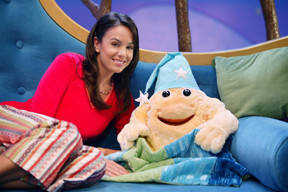 Nina and Star of Sprout's "Good Night Show": A duo certain not to know the Packers score.

There's certainly a lot of convenience to modern technology.

My wife and I rarely watch our favorite primetime programs at their prescribed times. (Who needs their 2-year-old repeating sex jokes from an 8 p.m. "family comedy?")

Instead, the modern marvel that is DVR keeps us up to date with the comings and goings of the Hecks, the Pritchetts and Sheldon, Leonard and Penny.

Live sports are a slightly different proposition. I've recorded important games by my favorite teams, but only so I can perhaps go back and watch parts I may have to miss.

On Saturday I had to try a different experiment, though. We were celebrating my wife's birthday with dinner at Almost Home followed by a couple of movies at home.

At the same time, the Packers had a primetime NFL Wild Card matchup with the hated Minnesota Vikings.

DVR went a long way toward solving my problem, but not all the way.

Besides planning to watch the game after Nicole went to bed, I also had to effectively avoid sports media of all sorts.

The first solution was easy -- turn off my cell phone. In this way, I avoided text updates from ESPN and any comments from my friends regarding the game.

Next, I had to make sure I didn't accidentally see some part of the game -- or even a score -- either between movies or as I turned on the TV to watch the recording on the game.

That meant making sure the cable box was not tuned to any of the following: ESPN, NBC, any other sports network, any other major network that might carry the news or any of the news networks.

So where to go to avoid these? PBS Sprout, my son's favorite channel, with its 24 hours of programming for pre-schoolers. No reason to worry about a Packers score there.

Finally, I had to just stay off of the computer all together. Even if I was going to check something totally unrelated to sports, I know how it is when I get on the Internet. My fingers just start typing "espn.com". It's compulsive. It's almost a sickness. I had to avoid it.

I can tell you, though, the experiment worked. Almost Home doesn't have a TV. We watched a couple of movies with no interruption or distraction. I never touched the computer and my phone was dormant, abandoned on the nightstand all evening long.

I started watching the game at 12:18 a.m., and that was also a success. I was worried about the game until I saw Minnesota backup quarterback Joe Webb actually try to throw a pass.

I turned my phone back on at some point approaching 3 a.m. and seven unread messages -- all of them regarding the game. Dodged a bullet there.

It was actually kind of freeing to fast forward through commercials and through the down time between Minnesota's offensive plays. I'm sure I missed out on some great insight from Chris Collinsworth, but I'll survive.

My only worry now is that superstition may get the better of me. Two years ago, I picked against the Packers in the opening round of the playoffs. Even though my confidence in them increased with every ensuing round, I felt I couldn't jinx them by picking them.

And so, I fell really far in the Banner Upickem challenge that year. On the other hand, the Packers won the championship.

It was totally worth it.

This year, the superstition may be watching a tape delayed version of the game. Not only did the Packers find success when I did it, I was way less high strung, knowing the outcome was already determined, even if I didn't know what the outcome was.

So will I be watching the Packer-49ers clash this Saturday at 8 p.m. or this Sunday at some time after midnight? Time will tell, my friends, time will tell.