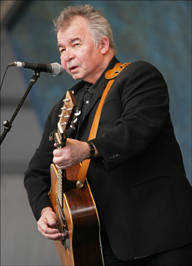 Maybe next time, I'll actually be able to hear you, John.

As much as I hate to direct any traffic to the ridiculous publication that is Rolling Stone, read this.

As much as I love going to concerts, many of these behaviors can ruin an otherwise great show.

In particular, I was enraged by a woman sitting right next to be carrying out No. 9 from the front row of an Amos Lee show a couple of years ago. I was so enraged by her behavior, that I took every chance I could to stretch or wiggle around in my chair or otherwise bump into her.

I hope that footage was terrible. What a miserable witch.

However, I'm actually here to tell you that -- as usual -- the good people at Rolling Stone got it wrong. I know this because about seven or eight years ago I had the most annoying concert experience of my life, and it's not on this list.

It was John Prine at the Murat Theatre (or whatever bank it's named after now) in Indianapolis.

Now, as far as I could tell, the concert itself was awesome. It started with opening act Raul Malo (formerly of the Mavericks) performing with just his acoustic guitar. Malo was so good that Prine pushed him back out on stage to do a short encore.

I'm also pretty sure the Prine set was good but I can't say for sure because...

... was interrupted by someone screaming

(right on cue that time)

... at point blank range at the back of my head.

There was a group of drunk rednecks sitting behind us who couldn't shut up. Besides their idiotic quips was the dumbest and drunkest of them sitting directly behind me screaming every 10 to 30 seconds for the whole show.

All I could think of throughout the show was Kurt Vonnegut's short story "Harrison Bergeron," in which intelligent people have their thoughts scrambled by a radio transmitter every few seconds, just to keep them from having a coherent thought.

If our future distopian leaders ever want to do that to me, don't waste money on the radio earpiece, just have that idiot follow me around all day.

The Murat holds 2,601, and I can tell you that on that evening, the other 2,600 people in the audience had a better seat than me because of one moron.

It was terrible and it ruined my ability to enjoy one of my favorite songwriters ever.

So, based on my experience at that of one Rolling Stone writer, I can only say this: Shut the heck up and put your cell phone away.