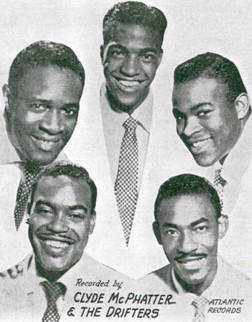 ... That's right, not Bing Crosby. Bring on the hatemail.

Of course, this will always be Bing's Song (inasmuch as it's also Irving Berlin's song). But for my essential holiday listening (which was the original point of this list), the Drifters make each Christmas complete.

I say this because 99 percent of the cover versions of this song I've ever heard try to be a facsimile of the original. They all try to be Bing, and -- while some are really good -- all fail to some degree.

It's a credit to Bing that he's often imitated, never duplicated.

But the Drifters didn't try to imitate Bing. Recording their cover 12 years after Bing's original. (and seven years after the slightly reworked version most of us know), they decided to take the words and melody, speed things up slightly and make some doo-wop magic.

Leading off with Bill Pinkney's bass, contrasted Clyde McPhatter's high-pitched tenor in the second verse, the song is lighter, more playful, than any other version.

It's so good, in fact, that next to no one even tries to imitate this version. (I'm sorry, Michael Bublé and Shania Twain: Nice effort, but you fall well short of the Drifters.).

And it's certainly never duplicated.

A nod goes to Elvis for taking elements of both Bing and the Drifters and giving us a nice rendition. However, it fails to reach the transcendence of either of its progenitors.

The Drifters version has also been helped over the years by Hollywood's rediscovery of it in the 1990s. While it was most prominent in the "Home Alone" aftershave scene, it was also featured in "Mixed Nuts" and "The Santa Clause."

"Home Alone" is certainly how I was introduced to the song. As a nine-year-old, I saw the movie in the theater and later owned a VHS copy that I wore out over the years.

Some of my favorite scenes in that film featured classic rock 'n' roll Christmas songs such as Brenda Lee on "Rockin' Around the Christmas Tree" and Chuck Berry on "Run, Rudolph, Run."

But nothing captured my imagination quite like the amazing reworking of a Christmas standard that, even at that age, I'd heard hundreds of times with it never really speaking to me.

This version will always speak to me, though. Hit it, boys:

First, I have a live performance featuring Bill Pinkney, the last surviving member of the orginal Drifters. Mr. Pinkney passed away in 2007.

After that, you can listen to the original with some fun animation.