24 Songs of Christmas, Dec. 14: 'The Twelve Days of Christmas' -- Straight No Chaser and Tennessee Ernie Ford 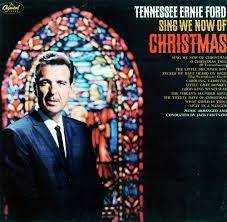 I regret to inform you that Straight No Chaser did not collaborate with Tennessee Ernie on this one. While that would be awesome, the a cappella group formed five years after Saint Peter finally called the man who "owed his soul to the company store."

Additionally, I'm choosing this song for today because if one were to indeed celebrate 12 days of Christmas, culminating on Christmas Day, the starting point would be Dec. 14.

Before I discuss my selection(s), let's consider the weirdness of these gifts.

Sure, it was originally published in 1780 so it's hard to judge. But are there any gifts in this song you would want beyond the FIVE GOLDEN RINGS? (It has to be spelled in all caps, right?)

Did people in the 1700s like turtle doves that well? Also, is that a bird or a reptile?

And if you consider the repetition of the days, the true love gave the following over the course of those dozen days:

Quick addition also tells us that we now have 364 rather strange gifts on our hands, 184 of which are birds.

One-hundred-eighty-four birds! We should be making a Hitchcock flick with those numbers.

I hope on the 13th day of Christmas My True Love gave to me a truckload of birdseed.

But let's not tear it down too much. It's still a really good song.

On to the (lack of a) selection:

I'm torn on this song. I've loved the Tennessee Ernie Ford version since I was a child, riding around in the back of my mom's 1980 Pontiac Bonneville. I'd pick up the big, blue case of Christmas cassettes and choose the next one out, drumming along on the case until the current album was over.

I couldn't imagine a voice bigger than Tennessee Ernie's. His versions of Christmas classics were always spot on, but none was better than his big ensemble rendition of "The Twelve Days of Christmas."

So here that is, in all its traditional glory.

On the other hand, there's the Straight No Chaser version. How could I ignore the best thing to come out of Bloomington since Calbert Cheaney? These guys are awesome.

And this highly amusing version of "The Twelve Days of Christmas" (laced with about a half dozen other songs) is what got the a cappella introduced to the public at large, just eight short years after it was recorded.

It's just way too amusing not to include here.

So I didn't really make a choice today. I love them both. The numbers are just too big in this song for me to choose only one.

Consider it this way: You can put up with two songs today or I can give you 364 random gifts you don't need at all over the next 12 days.

But then, you're probably not my true love. (But seriously, Nicole, you're also not getting all those things.)

Up for Sunday: "What Child Is This?"

Dec. 13: 'Have Yourself a Merry Little Christmas' -- Judy Garland