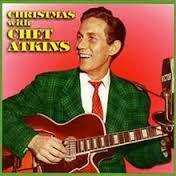 So here we are: 24 songs (or thereabouts) in 24 days. I figured I'd fail somewhere about a week in, but here it is Christmas Eve, and no failure so far.

And on to the best Christmas song of them all.

In discussing "O Holy Night," I spoke of how difficult it is to do it well, which makes it hard to choose a really good version.

"Silent Night" has just the opposite problem. I've rarely heard a bad version. Heck, even Stevie Nicks pulls it off, and she's not the first person I'd go to for most Christmas songs.

I think the secret is in the song's simplicity. It's a simple song, not too demanding on the vocals or on instrumentation.

It started in 1818 at St. Nicholas parish church in Oberndorf, Austria. A blizzard had stranded the village and the church organ was broken.

So Father Joseph Mohr, who had composed the lyrics two years before, called on organist Franz Xaver Gruber to compose a melody that could be played with simple guitar accompaniment for the Christmas Eve service.

It has since been translated into countless languages. Before moving on, let's enjoy it in the original German.

And while we're here, enjoy what Pink Martini (we've seen them before) did, performing the song in German, Arabic and English. It's beautiful however you slice it.

I also want to share the following video. It's from Johnny Cash's 1977 Christmas show. Not the best version (Johnny never could sing), but look at the ridiculous collection of people on that stage:

And if you want to be really entertained (and have 45 minutes to spare) check out the entire show.

But I'm going a different route with this final selection. No words, just the music. (You know the words anyway.)

So here is Mr. Guitar, Chet Atkins, with a beautifully simple version of our final selection of this list: "Silent Night."

Up for tomorrow: I think I'll take the day off for Christmas. I gave everyone a bunch of videos to take in today, anyway. Enjoy some time off, and take the time to enjoy your favorite Christmas songs.

Don't be shy about letting me know what they are and where I went wrong with this list. I'm sure I stumbled somewhere.

Merry Christmas, folks, and thanks for reading.

All of the selections