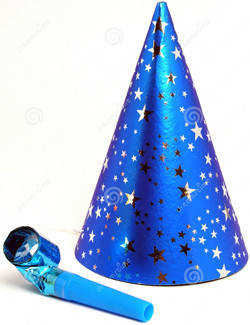 As I was finishing up my set of Christmas music blogs, I had a thought of (somewhat sarcastically) naming my favorite five or seven New Year's songs.

1) I was exhausted. As a guy who sometimes goes a month with just one blog, posting one every day was crazy for me.

2) I wanted a few days off from blogging for Christmas.

And that final factor looms most heavily. Name me a great New Year's Eve (or Day) song.

I don't want to hear anything about "Old Lang Syne." Perhaps Robert Burns' original in Scots sounded a bit better, but I can't do much with the English version.

What does the song mean? Where did that terrible melody come from?

I'm just glad to have someone to kiss at midnight so that the first moments of my year aren't occupied by that song.

I considered posting U2's "New Year's Day" here, but it had two different videos and I can't seem to find a copy of the better one (where Bono and the boys are wandering in the snow) that has good audio.

Besides that, it's kind of depressing and I can't figure out what it's about either.

In the face of that, I decided to go with a song that just makes me happy.

So here it is, the happiest music in the history of time, as always, the live version because the studio version is lame.

(This one's dedicated to a couple of my BG office mates. You know who you are.)