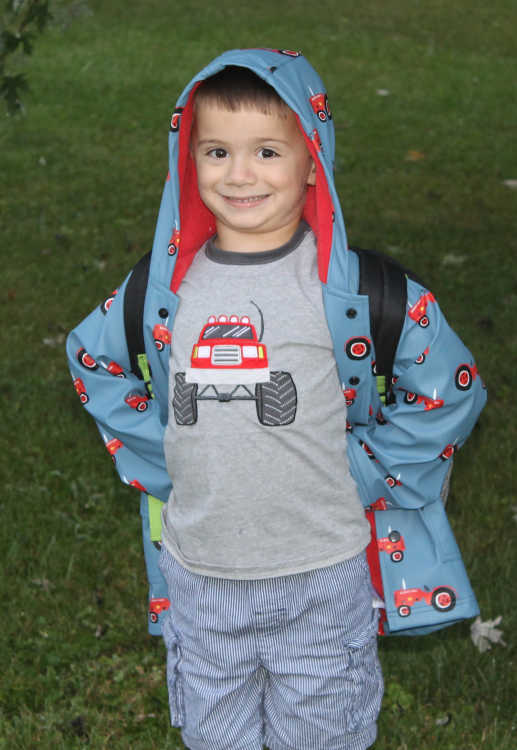 Of course he didn't need the jacket. If it gets a kid on his way to his first day of school, you just don't argue.

Please indulge me on another "my boy's growing up so fast" blog. I promise you that there is a 50-percent chance that the next blog won't be about my son. OK, 30 percent.

Now, by only sending our son to one year of pre-school (pre-K, to be exact), I know we put this day off for a year. But that doesn't mean it's any less of a "my word, time flies" moment for Mom and Dad.

I was already awake when Miles woke up Monday, but I wasn't greeted with the usual sound of his little feet sprinting across the house to jump in our bed. Instead, he had apparently been awake for a few minutes listening to his Bob Dylan CD.

So I walked into his room and was greeted with "I'm going to school!"

Good start, I thought. This should be easy.

Of course, it wasn't all easy. Breakfast was a 45-minute affair of him refusing to eat, dumping his Fruit Loops, spilling his apple juice and repeatedly telling us he was scared to go to school.

Then breakfast and the rest of the routine got done and he was excited again. He wanted to go right now. Unfortunately, we'd gotten up extra early, so it wasn't time.

At some point in the next 20 minutes, he changed his mind about three more times before deciding at just the right moment that he did indeed want to go.

It's a good thing because he didn't have much choice at this point.

The part at school was super easy. We were greeted at multiple points with a friendly face and a cheerful "good morning." When we got to his class, we snapped a picture with his teacher and were on our way.

So I'm expecting a good report when I pick him up in a couple of hours. Nicole and I never had any doubt that he would do well; we just weren't so sure how we would do with it.

I've been told that the first day of school is just a blink away from going off to college. I'll be trying to keep my eyes wide open for these next 14 years.