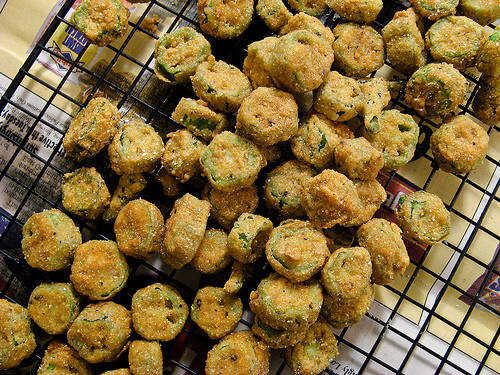 It's not illegal, it's delicious.

Any okra eaters out there? I'll partake in it occasionally, either breaded and deep-fried or as a gumbo ingredient. It's not my favorite vegetable, but it's good when prepared correctly.

Okra and I have a varied history going back to when I was about seven years old. I was spending a week at my uncle's house when he told me we were having okra that night.

Well, of course, that sealed the deal. I was absolutely going to try okra that night. The buildup to it was awful. I think I even cried at school that day, telling my teacher that Uncle John was going to make me eat okra that night.

Supper came and I tried it, and hated it. But I wasn't required to keep eating, just maybe eat a small portion so that I had tried it.

So I spent the next 15 years or so thinking I didn't like okra, until I ordered it at a Cajun place at some point in my early 20s, and discovered that grown-up me liked deep-fried okra pretty well.

(But really, what isn't good when you bread it and toss it in a deep fryer? ... Still thinking. I'll get back to you.)

What I didn't realize was that my uncle was pushing some illegal drug on me. At least that's what some Georgie police thought last week.

Georgia farmer Dwayne Perry was minding his own business, growing some okra, when he noticed a helicopter hovering overhead. The next thing he knew, deputies were on his doorstep, fully armed and with a drug dog.

But what they thought was marijuana turned out to only be that tasty, little plant that works so well in gumbo.

Somehow, highly trained (I assume) members of the governor's drug suppression task force had mistaken okra -- with it's five-pointed leaf that looks more like a maple leaf -- for the cannabis plant.

Do a quick Google search. They don't look alike, except for, you know, leaves and stems and a green color.

And now the poor farmer is wondering if all the cops showing up on his porch will give him a reputation around the community. He also wonders what would have happened if one of them had gotten overzealous and injured him or worse.

Can you really blame him?

I I have loads of respect for police. They have a tough, thankless job and they put their lives on the line every day. We can't say thank you enough for what they do.

I'm just happy in the belief that the police here in Greencastle and Putnam County are trained well enough not to make a mistake like this.