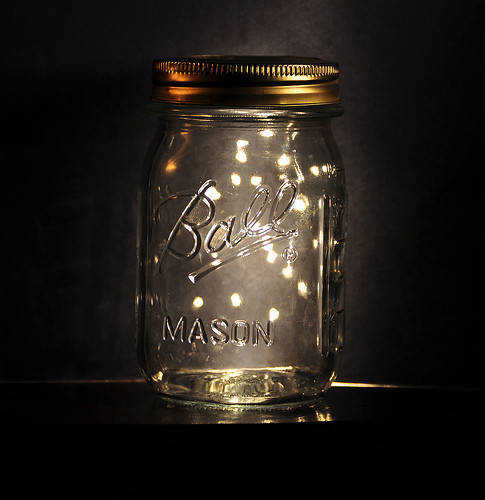 On Sunday evening while sitting right here at my desk, I received a tearful phone call.

It seems a little boy on the other end of the line wanted my help catching lightning bugs. Or is it fireflies? Peenie wallies?

Regardless, we call them lightning bugs because we're Hoosiers and that's the way it is. Firefly is the name a brilliant yet tragically short-lived space western TV show. At least that's what I've been told. I didn't watch it.

But back to catching fireflies -- I mean lightning bugs. My son was disconsolate on Sunday evening, just wanting me home to catch our luminescent little friends.

Instead, I had to try and calm him down and promise we would do it Monday.

So when Monday evening came, there was no doubt what we were doing as 9 p.m. approached.

We had a pretty successful evening -- a dozen or so lightning bugs in a small jar. Of course, we forgot to use them for a night light, and they just remained on the kitchen table until this morning.

It's was nice bonding with the little man over something I did as a kid, but the experience illustrates a bigger development in my son's life. He's starting to get into nature a little bit.

While he's always liked being outside for things like playing in the sandbox and splashing around in the kiddie pool, interacting with the natural world has been something of a problem.

Since he was a baby, the feel of grass on his bare feet has freaked him out. While this has gotten better, it's still not something he loves.

Likewise, he never used to want to touch bugs. Lightning bugs were the first to go, but it got even better a couple of weeks ago when we went to an outdoor wedding and during the reception Miles and another little boy adopted a green bug they found and named Greeny.

I was trying to figure out who this little boy was and what he'd done with my son.

Miles has also expressed an interest in fishing, and even though the one time I took him I had to always bait the hook, I'm still holding out hope.

He has said before that he wants to be a scientist -- well, a ninja scientist, to be exact. While I think that "scientist" to him more means a guy who builds robots, I know his explorations of nature will also serve him well on that journey.

I just hope there are no more tearful phone calls because Dad can't be a part of the explorations.