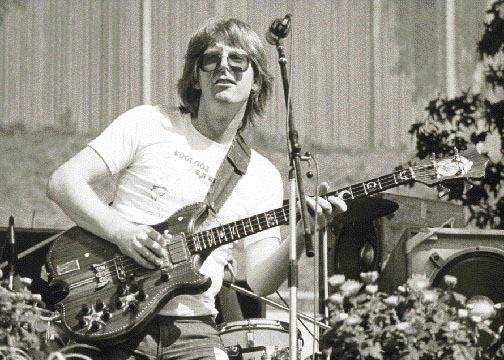 This blog is about a song by the Grateful Dead and, eventually, my dad. That's ironic because to my knowledge, Dad has never listened to the Dead. He would probably call them a bunch of dope-smoking hippies. While he wouldn't be wrong, I suppose I don't take that to be such a negative thing. A lot of my favorite music was made by dope-smoking hippies.

When music is a constant presence in your life, it can have a way of sort of lying dormant in your life until one day it suddenly means something more.

I found this a number of years ago with Jackson Browne, whose music I dismissed for years. Then one day I discovered that music about being a grownup actually makes sense once you are, you know, a grownup.

But this blog isn't about the guy who once stood on a corner in Winslow, Ariz. Instead, this is the first "Friday Jam" that's actually about a jam band, although not the jammiest song in their catalog.

I've long been a fan of two albums and three other songs by the Grateful Dead. The individual songs are "Mexicali Blues" (technically a Bob Weir solo song, but it's the Grateful Dead), "St. Stephen" and "Touch of Grey," the one Dead hit I can actually remember.

The albums are "Working Man's Dead" and "American Beauty." I limited myself to these two classics of country rock for a simple reason: I don't like jam bands. At least I didn't think I did. That stance could be softening, but all the same, today's subject fits squarely into the category of country rock.

Without further introduction, I present "Box of Rain."

I've been listening to "American Beauty" for years and I've never thought much about this song. I always figured it was a nice enough opener and it was probably the fourth or fifth best song on the album, a solid B, but really more of a means to an end on the way to my favorite track "Friend of the Devil."

My opinion changed after listening to a recent episode of The Great Albums podcast, which is a great twice-a-week listen if, like me, you love full albums of music and obsess over their details.

That episode taught me a lot more about this song and gave it some very personal meaning to me. "Box of Rain" was the first album track from the Dead to feature bassist Phil Lesh as lead vocalist. This was for very good reason. Lesh co-wrote the song with the band's lyricist Robert Hunter as something to sing to Lesh's father, who was dying of cancer at the time.

The emotions are familiar to anyone who's watched a love one fade away from a terminal illness. It conveys the helplessness we feel, knowing there's nothing we can do to stop this thing that's slowly but surely consuming our loved one.

What do you want me to do, to do for you to see you through?

The song does a good job, though, of quickly moving beyond the helplessness and into the much more useful function of providing comfort. The "Box of Rain" of the title is Hunter describing this world as a place we exist for only a short time.

He keeps this up as the song moves forward, describing life as "all a dream we dreamed one afternoon long ago" and closing the song with "such a long, long time to be gone and a short time to be there."

The song is a sort of lullaby for someone who's seen a lot of things and now just needs comfort as he moves toward his next journey.

Like a lot of Hunter's lyrics, the emotions conveyed are specific, but the imagery is beautiful and vague enough that you can insert your own meaning.

For me, the song is about my dad, who I've watched struggle with dementia for more than half a decade now. In fact, he's probably too far gone for the words to do much to comfort him now. But they still mean something to me.

Those of us being left behind need comfort too.

When, late in the song, Lesh sings "walk into splintered sunlight," those five simple words give me a very clear picture of a version of Dad that I never met. He's a much younger man than I can remember, perhaps in his late teens. Tired from a day's work, the "splintered sunlight" is provided by the sun shining through the slats of a recently emptied corn crib.

As a poor farm kid, Dad did a lot of odd jobs as a teenager and young man, including working on a crew that went around shelling corn for farmers in the Warren County area. Dad talks about how they had old equipment, so they ended up getting all the old and odd-shaped corn cribs — the jobs no one else wanted.

I don't know a darn thing about corn shelling and I hope I got the story right. But whatever the accurate retelling is, this song makes me think of it.

I'm confident that neither Lesh nor Hunter were thinking about shelling corn when they wrote this song. But I'm glad they wrote and performed it. We all need some comfort sometimes.

(Quick side note: For such a legendary live band, it seems a shame to center this post on a studio version, but Phil Lesh doesn't have the strongest voice and the lyrics don't come through that well on any live version I've found. If you're looking for something live and upbeat, here's a bit more of a party song.)