What does one of the Seattle Grunge Big 4 of the early 1990s have to do with a current purveyor of folk/blues/soul/gospel/Americana/rock?

Probably not much. If I think hard enough about my own musical journey, I can probably draw a connection between Alice In Chains and Nathaniel Rateliff and the Night Sweats. Stops along the way probably include Pearl Jam, Wilco, Ryan Adams, the Avett Brothers and Mumford and Sons. It all has something to do with thoughtful, pensive young men with guitars and perfectly imperfect voices. 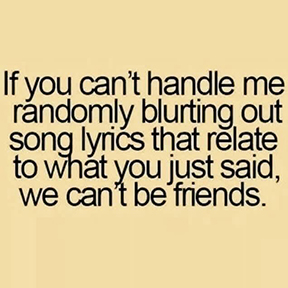 But, really, it has a lot more to do with the graphic to the right, which our sports editor sent to me last week.

It is indeed true. Any random phrase could send me off on a musical tangent from which I may not soon recover.

A mention of Robert E. Lee may get a classic song by The Band stuck in my head for weeks. (There are worse fates than that.)

A phrase as simple as "I don't wanna think about it" will send me back to the last great power ballad of the '80s — even though it came out in 1990. (Seriously, if you haven't watched that video in a while, marvel at The Motor City Madman deflecting bullets with a forcefield of pure, unadulterated RAAWWKK!)

The end of a storm sends me into a song from my favorite Beatle.

The same thing can happen with music that's seemingly unrelated. One of those terrible songs by Godsmack (I refuse to even link it.) always reminded me of Sade's "Smooth Operator." Turns out those jokers stole from someone besides Alice In Chains.

And Eric Clapton's much-celebrated solo to "Sunshine of Your Love?" It's really the melody of a certain doo-wop classic.

The singers are nothing alike. The songs are nothing alike. But every time I hear "Wasting Time" on the radio (which is a lot lately), I think of Alice In Chains and being 16 years old and being OK with listening to certain ballads, provided they were made by angry dudes with long hair and guitars.

These songs make me happy. And they make me think.

In the end, aren't those two of the best things music can do for a person?