I hear you singing in the wire... 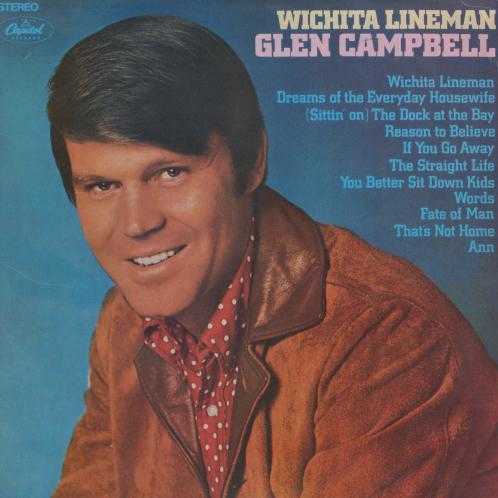 I don't remember the first time I heard a Glen Campbell song. It was just sort of always there, part of the fabric of my life growing up in a country-listening home.

My late mother adored Campbell. As a kid, I imagined it was for his All-American Boy good looks as much as for any merit the music he was making. The older I've gotten, I realize I was selling both Glen and Mom short.

But Glen was always just there — dusty 12-inch records with a handsome man on the front tucked away on shelves, occasional appearances by a slightly older Campbell on some TNN show (Remember The Nashville Network?), a half dozen songs that were staples on my favorite radio show "Country Gold Saturday Night."

There were also arguments. Mom, devoted Campbell acolyte, probably spent more than 30 years debating the artistic merits of Glen Campbell and Johnny Cash with Bob Brown, my dad's best friend. Why did they debate those two artists specifically? I've never understood, except that Mom and Bob both enjoyed some good-natured sniping.

Privately, Mom would admit that Cash was actually really good, that he just couldn't sing. I love Cash, but she wasn't wrong. Bob, a less compromising personality, would likely have made no such concession to Campbell.

The older I got, the less I heard Campbell's music. Somewhere around high school, I discovered alternative rock and left a lot of my country leanings behind. Outlaws like Cash and Willie Nelson and Waylon Jennings were still all right, but there was no room in my narrow, teenage worldview for slick "Countrypolitan" artists like Campbell.

As I got into my mid-t0-late 20s, I began rediscovering Mom's record collection. And while it was devoid of some of the cooler stuff I thought a Baby Boomer's record collection should have — Zeppelin, Stones, Jimi, Dylan — the ability to delve a little deeper into someone like Campbell was rewarding. And you can always find those other guys in a thrift shop somewhere.

What a guitarist he was. What an interpreter of songs — particularly those written by Jimmy Webb.

And in my ever-expanding musical interest, I've discovered that Campbell, ace guitarist that he was, spent time as a Los Angeles session musician, part of the legendary Wrecking Crew. He was even a touring member of the Beach Boys at one point.

More recently, Glen Campbell's story has become more personal to me, and more related to Dad instead of Mom.

We lost Mom in 2011 and the nearly six years since have been marked by Dad's descent deeper into dementia. As such, Campbell's own public struggles with Alzheimer's disease have interested me. From afar, I admired his bravery in confronting the disease publicly, when no one would have blamed him for quietly retreating to a private life.

Instead, he went out for one last tour, one last album. The public embraced it and I really feel that Campbell went out on top, which is wonderful.

I've devoured press clippings on Campbell, taken in all the updates, wondered about his plight in between updates.

What I've yet to do is watch "I'll be Me," the documentary about that last tour. It's been saved on my Netflix account for I don't know how long. My index finger has hovered over the button to select it multiple times, each time ultimately thinking, "Not tonight. I'm not ready."

I know I'm going to watch it and bawl my eyes out — for Dad, for Mom, for Glen and his family, for my brother and myself — and I just never feel ready.

But I also know that day is coming, maybe sooner than I think based on Tuesday's news that Glen died in Nashville at age 81.

For now, I'm getting by on the music.

If I have to choose one Campbell song to remember him by, there really is no option. While I love the sound of his cover of Allen Toussaint's "Southern Nights," "Wichita Lineman" remains THE Glen Campbell song in my mind.

I remember being six or seven years old, listening to this record and really hearing it for the first time. While I couldn't have put words to it at the time, there was something different about this music than the honky tonk-style country that often came through those speakers.

There was something ethereal and undefinable about the string arrangement. Something haunting about the "BEEP-BEEP-BE-BEEP-BE-BEEP-BE-BEEP" part, to the point that I can still summon that sound in my head and I'm instantly a kid sitting on red and black shag carpet in our old living room. (I still can't figure out what the hell instrument is making those beeps.)

I also wasn't old enough to really understand the lyrics, what he really meant when he said "I hear you singing in the wire," but he was clearly lonesome. I loved the song, but understood I wasn't supposed to be entirely happy while listening to it. As someone who now listens to some pretty obtuse lyrics, I know the emotion of a song is more important than the specifics anyway.

And can we also take a moment to note the songwriting prowess of Jimmy Webb, who's written hits for a number of artists but to me will always be the guy who wrote this song, "By the Time I Get to Phoenix" and "Galveston" for Campbell.

So here's "Wichita Lineman." I sometimes like to seek out live performances for my blogs, but the studio version is the way I want to remember this one, with all its Wrecking Crew flourishes and even a needle drop and vinyl crackle at the beginning.

Thanks for the memories, Glen. I'm happy you now have yours back.