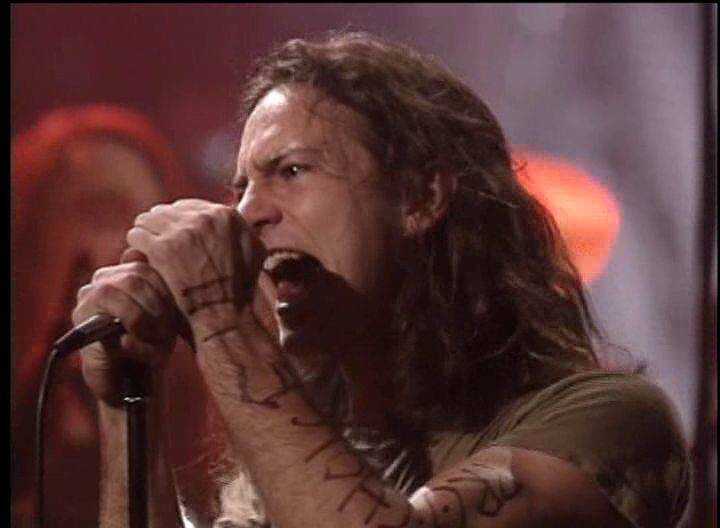 In my teenage years, I often operated under the (flawed) assumption that bands needed to be serious to truly be good. Having fun was OK, but it was always secondary to the music actually "meaning something," whatever that means.

As such, a saw a strong line of division between the stupid (but actually fun) bands of the '80s and the respectable (but probably a bit too dour) bands of the '90s. (Check out that guy pictured at the top. Sure, there's a raw, amazing energy to 1992 Eddie Vedder, but c'mon, man, smile a little!)

As such, a band like Van Halen could never have my respect. It didn't help that we were firmly in the Van Hagar era by then and to this day, the only song of that era I like is "Finish What Ya Started," which sounds like pretty much nothing else I ever heard the band do.

But even the Diamond Dave stuff, which is generally awesome, never really spoke to me until I lightened up a little in my college days. (Perhaps beer influenced me?) It was then that walls started breaking down in my musical tastes.

Can you play Pearl Jam next to Van Halen next to Bob Dylan next to Willie Nelson next to the Wu Tang Clan next to the Clash? Buddy, you can do whatever the heck you want. As those sages the Isley Brothers (also acceptable) taught us, It's Your Thing.

Still, though, even as Pearl Jam aged and seemed to lighten up, they kept that reputation as a serious band. They were influenced by artists "that mattered" like Fugazi and Neil Young and the Who and Black Flag. While that's all true, they were also heavily influenced by bands who knew how to have a little fun like Kiss or Cheap Trick or even our goofy friends in Van Halen.

That all comes through here with their fun take on "Ain't Talkin' 'bout Love," my personal favorite Van Halen song. The clip even includes a little discussion of the good-natured tension that exists in a band over whether covering something outside their normal comfort zone is a good idea.

Having watched the clip a couple of times I can tell you, it was a good idea.

The clip also reveals what good, versatile musicians these guys are, in that it seems that the idea of doing the song didn't come up until soundcheck, but they were able to work it out and pretty well nail the arrangement. And Mike McCready's ability to bring Eddie Van Halen's distinctive style into his own is pretty amazing. (Even during the writing of this, I've learned there is a clip of McCready doing "Eruption." Amazing. Apparently, rock 'n' roll really never forgets.)