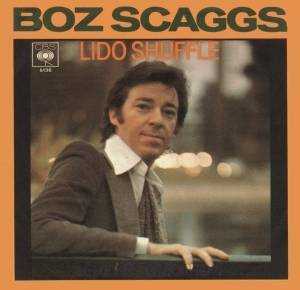 I spent years mixing up Boz Scaggs and Ry Cooder. In fact, I still have trouble deciding which one is which. (They really aren't all that similar.)

In the weird associations of my mind, they are "those dudes from the '70s with nonsense syllables for first names."

I probably can't name you a single Ry Cooder song.

Not so much with Boz Scaggs, though. It was that way until two or three years ago when one day Eric said to me, "Well, you know the 'Lido Shuffle," don't you?"

I told him that I honestly had no idea what those words meant.

Instead, I think Eric just told me to look it up, which is proof that the internet makes our lives easier but often much less amusing as well.

So, anyway, I did know this song and it's awesome!

I sometimes thing that when we look back at the defining music of certain eras, we shouldn't look at the biggest bands of the era. As much as the Beatles may have defined the music of the '60s or Led Zeppelin the music of the '70s, those bands would've been great regardless of era.

Instead, we should look at the songs that remain inextricably tied to that era, but are also irresistible even decades later. For me, if you want to define what the late '70s sounded like, "Lido Shuffle" has to be on your list.

Have a great weekend and don't miss the boat.