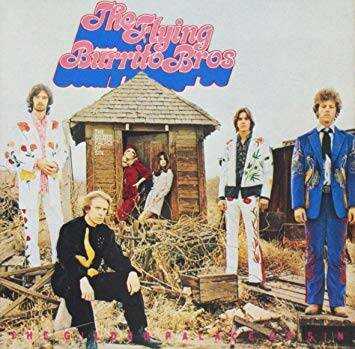 Let's get this out of the way first: The Flying Burrito Brothers is a terrible band name. I mean, it's like Strawberry Alarm Clock bad.

They were a very good, bordering on great, band but I would propose that a stupid band name helped keep them from realizing their full potential. Gram Parson's drug use and wanderlust were also major problems.

Regardless of the obvious marketing problems, though, the band has over the years become important to generations of musicians wishing to mix the country and rock traditions.

Listen to "Gilded Palace of Sin," their classic debut that came out 50 years ago this month, and you'll hear what I mean. "Hot Burrito #1," the song featured below, doesn't exactly fit that description, as the main melodic features are Sneaky Pete Kleinow's steel guitar and Parson's piano. For examples of country songs featuring Chris Hillman's loud, distorted guitar, check out "Christine's Tune (Devil in Disguise)" or "Wheels."

But I'm talking about "Hot Burrito #1" for two reasons. The first is that it's a really good song, with its undertones of love and loss and regret. It's a beautiful song and my understanding is that it was all kind of a jam, over which Parsons just started singing. (Can we add jazz to that mix of country and rock?)

The second, though, is to again note the importance of what you name something, whether it's your band or your song.

What the heck does "Hot Burrito #1" mean? I assume it was just the working title of the song when it was just kind of a jam. But once it became a real song that was going to make the album, maybe take a couple of minutes to take some lyrics that reveal a bit about the song and turn them into a title. I'm thinking maybe "Once Upon a Time" or "I'm Your Toy" or "Your Old Boy."

But, hey, don't let that change your enjoyment of the songs. Enjoy the music. Enjoy Gram's weird facial expressions. Enjoy the Nudie Suits and the way they inject a bit of psychedelia into traditional country music attire.

Most of all, enjoy your weekend and be good out there, boys and girls.