Thursday Jam: I Believe in a Thing Called Love-The Darkness 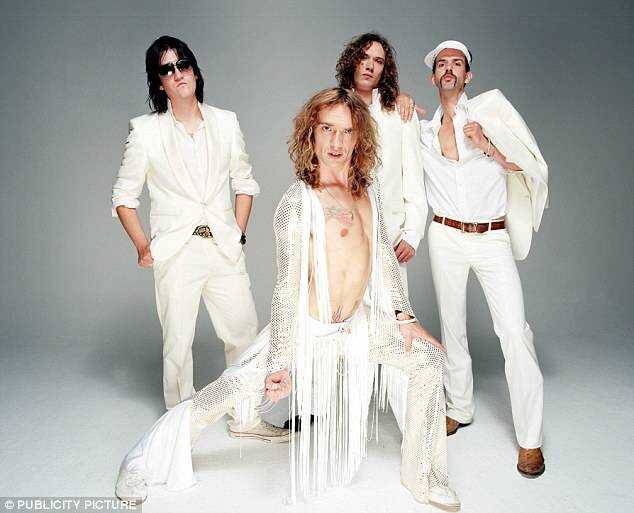 (The Darkness, kids, is a British glam metal band that formed in 2000 but really burst onto the scene with their highly-successful debut album "Permission to Land.")

It really didn't make much sense for me to like The Darkness back in 2003. I was digging on a few current acts at the time (The Strokes, The White Stripes, Outkast) but I spent a lot of my time discovering stuff I should have been listening to years before — The Clash, The Replacements and several alt-country bands of the 1990s.

Those bands are about as similar, musically, to The Darkness as I am similar, physically, to Manute Bol. (May he rest in peace.)

I'll never forget the first time I heard of this band. I was watching MTV when an MTV News Brief with Kurt Loder came on.

(MTV, kids, didn't used to be a reality television network about the most cartoonish human beings imaginable. MTV originally stood for "Music Television" and its bread and butter was music videos featuring some of the most cartoonish human beings imaginable. The difference back then was the people in the videos were also talented.)

I'll never forget the words with which Loder opened his report: "They've been called the gay AC/DC or the straight Queen."

My immediate thought was, "That's an amazing description. Whatever the hell he's talking about, I'm in."

He was, of course, talking about The Darkness, a four-piece featuring brothers Justin and Dan Hawkins, Frankie Poullian and Ed Graham.

The real attraction was the charismatic Justin Hawkins, who was both lead singer and lead guitarist. He was a sort David Lee Roth-type figure, but with guitar skills and a vocal style that I've not really heard before or since.

I'm not here to tell you this was the best band or best album I've ever heard, but it was so much fun. In an era when rock was tending toward the introspective, indie end of the spectrum, The Darkness was brash, overtly sexual and willing to act in a way most bands had not since the grunge revolution. I loved the '90s but it was refreshing to see a band trying to get the party started again.

In the states, The Darkness's popularity was short-lived. Their second album, "One Way Ticket to Hell ... And Back" (Does that even make sense?) did well, but not as well as the first.

In 2005, Justin Hawkins went into rehab, and the band broke up after he got out.

They did, however, re-form in 2011 and have been together (with some lineup changes) since. I can tell you, that was news to me this morning. Again, I unfortunately tend to forget about this band.

They've actually released a total of six albums over the years. The most recent, "Easter Is Cancelled," got mostly good reviews. I haven't heard it, though I may have before the day is out.

But revisiting "Permission to Land" again today, it still holds the power it did when I was 22. It's just loud and unashamed to rock.

The record has a few gems, including "Love Is Only a Feeling," "Givin' Up" and "Get Your Hands off My Woman."

But the centerpieces has always been "I Believe in a Thing Called Love." If you don't know the band or just need a refresher, watch one or both of videos below.

The second is the original video, which is comical with its shagadelic spaceship motif.

But the live video is the real gem. First of all, you get Hawkins going full-on rock star, which is vain and kind of dumb of course, but also has its own charm.

More importantly, they pull the song off really well on stage. I've been to a lot of concerts of varying quality in my time and I can tell you, the performance this band gives is a rare one. The kind of vocal acrobatics Hawkins performs in this song are hard enough in a studio, but doing it on stage in front of thousands of people is nearly impossible for most singers.

All of that is to say, The Darkness was (and I assume still is) a good rock band.

I'm glad to know they're still around.