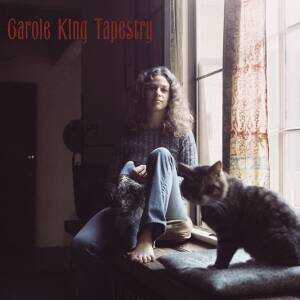 In a matter of about five minutes this afternoon, I learned two things.

1) Today is the 50th anniversary of Carole King's "Tapestry."

2) Carole was named as a nominee to the Rock & Roll Hall of Fame today.

A couple of things here. First of all, how is she not already in the Hall? I guess she already is in as a "non-performer," given her 1960s career as a songwriter with then-husband Gerry Goffin. But that's not enough. She's been an established performer for 50 years now.

While it's easy to make the argument that she's not "rock & roll," that's a tired argument. If Notorious B.I.G., Joan Baez, ABBA, and countless others are rock (and I'm fine with their inclusion), then so is Carole King.

Also, James Taylor has been in for 21 years. They've spent the last 50 years or so making basically the exact same kind of music. In fact, Taylor recorded the more famous version of today's honored song, which King wrote. And yet he was worthy of induction in 2000? Weird. They should have made it in at roughly the same time.

But enough of that. If you ask for a list of the "greatest songwriters" of the last 60 years or so, you'll get a lot of names. In far too many of those lists, mine included, you probably go way too far before you come to Carole King's name.

But you'll be hard pressed to find a better collection of songs than "Tapestry."

I'm playing "You've Got a Friend" here today. Like so many great songs, its beauty is its simplicity. The words are so simple and straightforward that I don't understand how it took until 1971 for someone to retrieve them from the ether and make them her own. She has a way of putting into words what we were already feeling but didn't know how to express.

Thank you, Carole, for putting our feelings to music and sharing them with the world. The songs remain an inspiration.

So, if you still have your copy of "Tapestry," dust it off tonight and drop the needle on it. If you still have a working 8-track, then God bless you, though I doubt you'll have the same sound quality.

CD, cassette, streaming ... it doesn't matter. These are great, great songs. The quality will show through.

One might even say they'll "brighten up even your darkest night."

Be good and stay warm, my friends.