Friday Jam: Which one would you choose? 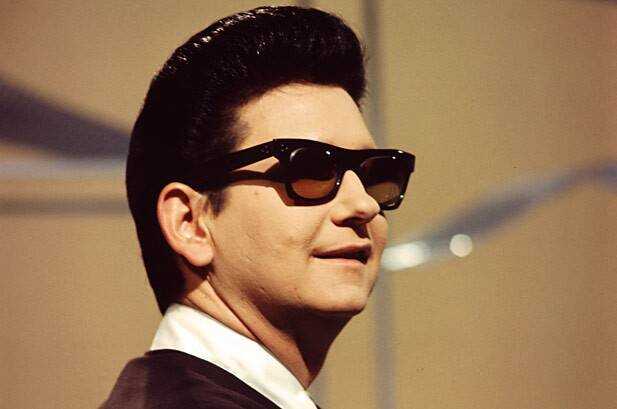 Not even a pompadour could make Roy Orbison entirely cool. And that's OK to the rest of us lovable losers.

Aside from Buddy Holly or Chuck Berry, Roy Orbison is probably my favorite figure in early rock 'n' roll. That voice, oh that voice. It seems fit for opera more than rock.

But it was more than him being a great singer or guitar player — both of which he certainly was.

In an era when many of the stars — think of guys like Elvis, Little Richard and Ricky Nelson — looked impossibly cool, Roy was defiantly uncool. Sure, Buddy had rocked the glasses before Roy, but he took it a step further with his dark glasses.

And these weren't cool shades, mind you, but the impossibly thick glasses of a near-sighted man with a dark tint to help keep the stage lights from bothering him too much.

More than that, though, it was the songs. The songwriting, especially on the sad numbers, really cuts you to the core. I think Bruce Springsteen — who further immortalized Roy by name checking him in "Thunder Road" — put it best:

[Roy Orbison] was the true master of the romantic apocalypse you dreaded and knew was coming after the first night you whispered "I Love You" to your first girlfriend. You were going down. Roy was the coolest uncool loser you'd ever seen. With his Coke-bottle black glasses, his three-octave range, he seemed to take joy sticking his knife deep into the hot belly of your teenage insecurities.

Unlike The Boss, I wasn't there living Roy's early-'60s heyday as an adolescent, but I still recognize it in his songs. He was the master of heartbreak.

Take his hit "Leah." The narrator is diving for pearls to give to his lover when he gets stuck and realizes he's going to die in his quest. But then he wakes up only to realize he's not dying, but that Leah already left him. In the context of the song, that's even worse.

Then there's "In Dreams," which falls along the same lines. My lady's long gone, but at least I can have her when I'm not actually awake.

Yes, there are moments of comedy like "Mean Woman Blues" or outright swagger like "Uptown" and "Working for the Man," but titles like "Only the Lonely" or "Crying" or "It's Over" or "Love Hurts" are much more the norm.

Into this context, you get a song like "Running Scared." The whole song sets itself up for a downfall.

It opens with just Roy's voice and the simple strumming of his guitar but quickly builds, instrument by instrument, feeling progressively more desperate as it grows.

The lyrics tell the story of the narrator, his unnamed lover and his insecurities about the possibility of her former man coming back.

And then the song really opens up as the former man comes back — "so sure of himself, his head in the air" — and the narrator's insecurities really flood over him.

With the music building to a crescendo, Roy utters the ultimate question of the whole song.

My heart was breaking. Which one would it be?

At this point, anyone with any knowledge of Roy's repertoire and simple rhyme structure is sure of what comes next. "Ah, dang, he's going to finish with something like 'walk away from me.'"

But then Roy gives us his M. Night Shyamalan-worthy twist at the end. She actually doesn't leave.

You turned around and walked away with me!

No matter how many times I've heard this song, (It might number in the hundreds?) I'm still never entirely sure how it's going to end. It's just that simple change of one word in the last line that flips the whole mood. He could have said "with" or he could have said "from."

The emotion is so raw in those final moments, it wouldn't really change his tone of voice.

And yet she always walks away with him. It's a nice reassurance for all of us "cool uncool losers" — from Roy to Bruce to you and me. Nice guys can finish first sometimes.

P.S. Can we also take a moment to appreciate that note he hits on the last line? Apparently it wasn't that way on the first studio take, as Roy explained in an interview.