Tuesday Jam: You better stop. Look around. Here it comes. 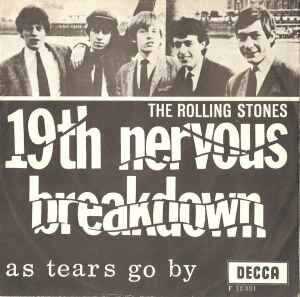 There's something about milestones that, for as remarkable as they are, are a bit depressing. As the years add up, we all start to realize our own mortality.

And so the fact that The Rolling Stones officially performed under that name 60 years ago today is bittersweet. I'm sure this news is less-than-optimal if you're old enough to remember those early Stones records (even a couple years later) or even remember the early 1960s at all. Even for those of us born a bit later, the news is pretty heavy.

But it's true all the same. On July 12, 1962, a group composed of Brian Jones, Ian Stewart, Mick Jagger, Keith Richards and Dick Taylor first called itself "The Rollin' Stones" played the Marquee Club in London.

Taylor was replaced by Bill Wyman later that year, with Charlie Watts joining as drummer in early '63.

Ian Stewart is an interesting case. He was an original member and remained associated with the band until his death in 1985. He was removed from the lineup by manager Andrew Loog Oldham in 1963 because he didn't "fit the band's image." It's rough when you're deemed more weird looking than Bill Wyman. Rest in peace, Ian.

So that gives us the lineup — Jagger, Richards, Jones, Wyman, Watts — that most of the world came to know as the Rolling Stones. There have been some changes over the years, such as Jones' spot changing to Mick (not Dick) Taylor and then to Ronnie Wood, Wyman departing in 1993 and Watts' death last year, but for basically 60 years, this band has continued to endure, and I could not love them more for it.

For a song today, I wanted to go back to the Stones' very earliest singles, but they don't really move me. Lots of early rock and R&B covers, but not really Jagger and Richards finding their voices as songwriters, nor the band finding its footing as musicians.

So fast forward almost four years and this performance of the February 1966 single "19th Nervous Breakdown."

The lyrics intrigue me in that they are in a sense ahead of their time and in another so backward they could never be dreamed of in a song today. On the one hand, Mick seems to be saying to the unnamed girl, "First World problems. Why are you wound so tight?" On the other, he's making sport of mental illness, which is obviously not acceptable.

Furthermore, the thought of them having such a flippant attitude toward mental health is even more glaring when you remember that Jones would be dead within a few years from substance abuse problems.

The camera work does a good job of highlighting Wyman, who doesn't always get his due. The song starts with a prominent bass line from Wyman and then concludes on what the band called his "dive-bombing" bass at the end.

There are other hallmarks of a classic Stones performance there too. Keith plays the lead on the opening riff before giving way to Jones playing lead on the verses. Keith has always called this method of trading lead and rhythm as "the ancient art of weaving," and he continued it later with Mick Taylor and Ronnie Wood. Mick delivers a live shamelessy plays to the camera and those screaming girls while still delivering the goods from a vocal standpoint.

And in back, there's Charlie, keeping the beat, seemingly oblivious to the chaos around him.

In the end, this probably isn't your favorite Rolling Stones song. It's not mine, but it's pretty high on the list.

But do yourself a favor today -- or any day -- listen to the Stones and enjoy life a little.