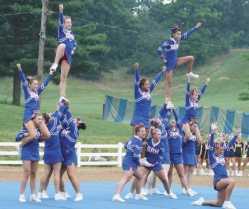 The Eagles were third in the overall competition, behind the champion Tri-West Bruins and the runner-up Mooresville Pioneers.

All four host schools from Putnam County performed in the varsity division with Cloverdale, Greencastle and North Putnam all competing as well. The Tiger Cubs actually took home the Spirit Award at night's end.

Having five counties represented in the contest set a record for the Putnam County event.

In the freshman division, only Greencastle and South Putnam competed, with GHS winning the title.

In the junior varsity division, Avon was the lone competitor and took the trophy.