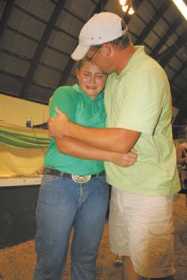 The 2007 Supreme Showman of the Putnam County Fair, 15-year-old Dakota Parent receives a hug from her father Doug, after the competition.

But he was also looking back -- back almost 20 years to when he stood in the same place as Supreme Showman of the 1990 Putnam County 4-H Fair. Thursday night, he got a chance to watch his daughter walk to the center of the arena and accept the 2007 Supreme Showman title.

The Reserve Showman was Walter Colvin, who represented the swine barn.

"I'm overwhelmed," Doug Parent said after giving his daughter a big hug. "She's worked the entire year with this one goal in mind. She's worked really hard to get here."

Representing the sheep barn, Parent said she was proud to be standing in the winner's circle, not only for herself, but for her father's honor.

"It's such an honor to win such an award and since my dad won, it's neat to follow in his footsteps," she said.

But according to Parent, winning the showman's title is not an inherited trait.

"It takes a lot of energy and focus," she said. "It's very tiring and exhausting, but very rewarding."

Parent said she spent the last few days really honing in her skills for the competition by going around to the different barns at the fairgrounds and working with various animals. Contestants must be able to show their own species of animal successfully, plus five other species -- horse, sheep, goat, dairy, beef and swine.

Named the 2007 Supreme Showman of the Putnam County Fair was Dakota Parent (right), joined by the Reserve Showman Walter Colvin. The awards were given Thursday night.

In addition to their showing skills, contestants must learn some of the basic facts about the animals. Parent brushed up on her knowledge by using the Internet and talking to friends who have livestock. Her favorite animal is, of course, sheep, but she said she also enjoys pigs.

All this preparation is paying off for the seven-year 4-H'er, not only in the present, but in the future as she hopes to attend Rose-Hulman and become an engineer.

She lists her favorite subjects as mathematics and science.

"4-H gives you kind of an example of how you have to work hard to get something," Parent said, adding that she thinks this will help her achieve her life goals as well.

Parent is the 15-year-old daughter of Doug and Staci Parent and lives in Russellville. She is a sophomore at North Putnam High School.

Some of the keys to surviving the showmanship competition, she said, are to stay relaxed as possible and study hard.

"I learned a lot from watching people show their animals and I acted like a sponge to soak it all up," she said.