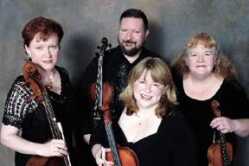 The Mirabel Quartet performs at 7 p.m. Wednesday in Gobin United Methodist Church in the ninth concert of the Greencastle Summer Classical Music Festival.

Admission is free, and the atmosphere relaxed and informal. The Festival's major corporate underwriter is York Chrysler Jeep Dodge of Greencastle, with other significant support from Fine Print Books, the Walden Inn, and DePauw University. This weeks concert is being presented with a generous gift from Neal Abraham of Greencastle.

Named for the famous palace and gardens in Salzburg, Mozart's birthplace, the Mirabel Quartet -- violinists Allison Edberg and Martha Perry, violist William Bauer, and violoncellist Debra Lonergan -- is devoted to the chamber music of Mozart, Haydn, and Beethoven, played on period instruments.

Eric Edberg, the festival's director and a DePauw music professor, explains, "This is the second of our 'early music' concerts, featuring performers using instruments set up as they were when the music was composed. These string players use gut, not steel strings, and a very different bow from what you normally see today.  Even many classical-music lovers are not aware that instruments have changed greatly over the past 250 years. It's a great treat to hear music by Boccherini, Haydn and Mozart performed on instruments that sound much as they did to these great 18th-century performers."

Wednesday's concert will feature Mozart's famous "Eine Kleine Nachtmusik," one of the most beloved works in all of classical music, as well as works by Haydn and Boccherini. The quartet debuted in St. Louis in 2004 on the series of Early Music St. Louis. In March of 2006, Mirabel enjoyed a successful tour of several venues in Chicago, including a live radio broadcast for WFMT and concerts at Quigley Chapel and the Chicago Cultural Center.

Allison Guest Edberg, a faculty member at Indiana State University, received the Willi Apel Scholarship in baroque violin at Indiana University, where she studied with Stanley Ritchie; she has appeared with him in recital. She has performed with Apollo's Fire, the Washington Bach Consort, La Monica, and Early Music Southwest, and is frequently featured at the Bloomington Early Music Festival.

Martha Perry (violin) completed her Master of Music in Early Music Performance at Indiana University, where she studied with Stanley Ritchie and served as his graduate assistant for the baroque orchestra.

William Bauer, baroque viola and viola d'amore, comes from St. Louis.  He began his baroque studies on the viola d'amore under Joseph Ceo at the University of Rhode Island.

Debra Lonergan (cello) was already a long-standing member of the Michigan Opera Theatre Orchestra in Detroit when she began to specialize in early music.