Putnam County Girls' Softball League President Yvonne Miller has overseen a summer of improvement at the leagues facility at Big Walnut Sports Park. Beginning in March and concluding in the coming weeks, the league has been building a new concession stand that will also have ADA accessible restrooms. 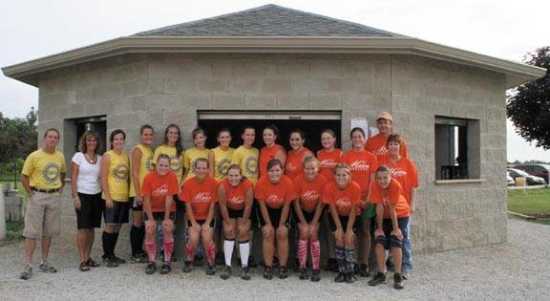 Previously, the league had a stand with no running water and no restrooms. To continue serving food, they had to have something with running water.

"It was time," Miller said.

Miller believes the facility will help the park financially as well as attracting more games and events.

"I want to see the park grow and become self-supporting. This new concession stand will give us that support financially," she said.

She said the stand is a credit to both the league's supporters and its participant. Major money donations came from Nucor Steel, IPL, Wal-Mart Transportation/Dispatch, Dixie Chopper and REMC Multi-County Community Trust, Inc.

Miller wished to thank one donor in particular.

"I couldn't have done it without Bill Horton," she said. "He was here a lot when no one else could be here."

More than anyone, though, she thanked the girls in the league for their efforts. Much of the money was raised by the girls themselves.

"We owe the concession stand to our girls," Miller said. "Mostly it was the parents doing the work and the girls raising the money."

One challenge of the construction has been the time it has taken.

"When you have volunteers, it takes a little while," Miller said. But she also added how well everyone has dealt with the construction throughout the summer.

"No one really complained," she said. "We kept it pretty clean. Basically, they had to deal with people in and out and moving things around."

The PCGSL finished up its season on July 19. With 236 girls enrolled, Miller was happy with the season.

"It's been a good year. Enrollment wasn't as good as last year, but you'll have a year up and a year down. It just fluctuates," she said.

The PCGSL year will officially conclude with its awards fun day at Big Walnut at 1 p.m. Saturday. The event will feature a coaches dunk tank and a giant slide. All participants and their families are invited.

The goal for the PCGSL is to have their park more widely used. Miller has already seen some of this and believes this addition will help.

"Our next goal is to hold a state tournament at the facility," she said. "We also let the Xplosion teams practice on our fields on Wednesdays to help them out. In return they help us with manpower on the fields."

This is the kind of use Miller want to see even more of.

"We want the park full all the time."